We just found some slides with juicy information about BlackBerry's 2011 lineup. Spoiler alert: there's a couple of (thinner) touch phones incoming and the OS is getting modernized with better graphics, browser, video and so on.

These slides show the CDMA versions, but the specs should be similar to the GSM variants - some of the listed handsets are even dual-mode (CDMA/GSM) phones.

Starting off with the BlackBerry Monaco Touch. It looks a lot like the previously leaked images of the BB Storm 3. The phone runs BlackBerry OS 6.1 on a 1.2GHz Qualcomm processor and 768MB RAM. It has a 3.7" WVGA capacitive touchscreen (with 253DPI) and all this is packed in 11.5mm thickness. 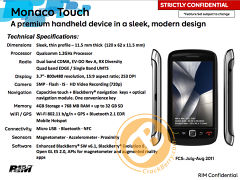 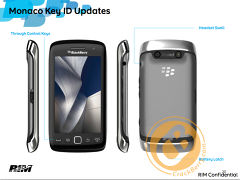 BlackBerry Monaco Touch and a ponential version with physical, instead of capacitive keys

The Monaco Touch is primarily a CDMA phone with EV-DO data connectivity, but also offers quad-band EDGE and single-band UMTS, for roaming purposes most likely. Another interesting feature is the 5MP camera, which can record 720p video.

There's a second slide titled "Monaco Key ID Updates" - it's not quite clear what that's about, but it the hardware keys are physical instead of capacitive. Other than that, it seems to be the same phone. 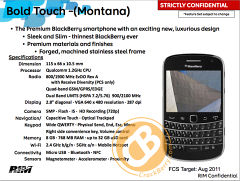 The Sedona would likely be known as BlackBerry Dakota in its GSM form, while the Curve Touch will be the BlackBerry Curve Apollo for its GSM version. On the other hand, it looks a lot like the Storm3 too. 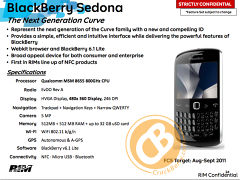 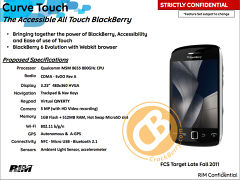 All these phones have Wi-Fi and GPS built-in and all but the Monaco Touch pack NFC. They support Wi-Fi hotspot functionality too, thanks to BlackBerry OS 6.1.

Here are a couple of other new things in v6.1 - 24-bit color support, OpenGL acceleration for 3D graphics, optimized WebKit-based browser with fast JavaScript, plus other goodies. 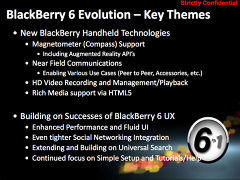 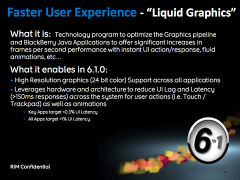 The roadmap leaked too so we know when to expect these new phones - the Monaco Touch and the Bold Touch (Montana) are expected in Q3 of 2011, the Sedona should hit in early Q3 and finally, there's a "Malibu" phone (which may be the Curve Touch) for early 2012. 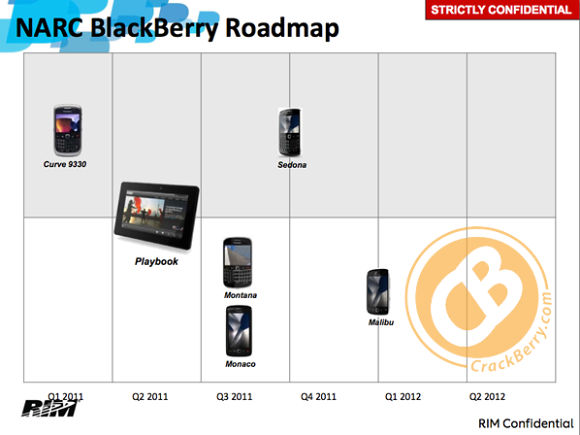 Overall, things are shaping nicely for the BlackBerry device portfolio. If only they could hurry up with the releases.

Don't know what people are talking about. Blackberry has been around for a long time they are great phones. The I phone sucks. Blackberry will wipe out I phone in the next couple of years for sure

Someone got paid big time for this leak