The BlackBerry Z10 measures 130 x 65.6 x 9 mm, which isn't too big for a smartphone with a 4.2" screen. We've seen better of course, with the Motorola Razr M/Razr i duo measuring 122.5 x 60.9 x 8.3 mm and featuring 4.3" displays. The difference in width goes down to the different screen aspect - 15:9 for the Z10 and 16:9 for the Moto phones. It seems BlackBerry could have done better with the space above and below the display. On a second thought, considering that swipes are central to the navigation and many of them start off the screen, they have an excuse.

The good news is that the BlackBerry Z10 is pretty easy to handle (it's just not as good as it could have been). At 137.5g the smartphone also strikes a good balance between solid feel in the hand and comfortable carrying.

BlackBerry has done a solid job with the BlackBerry Z10 design. With the touchscreen bar form factor admittedly offering little creativity, the Canadians have crafted a handset which has enough character, without being overdesigned.

The BlackBerry Z10 vs the Apple iPhone 5

We particularly like the patterned plastic back, which not only looks cool, but also feels nice to the touch and provides excellent grip. The front is not bad either, although certain similarities to the iPhone will have some people impressed for the wrong reasons.

At any rate, the BlackBerry Z10 is a nice looking smartphone, that no one will mind being seen with. It also feels pretty sturdy, so chances are looks won't fade too quickly.

A key difference between the BlackBerry Z10 and its smartphone rivals to run the major platforms (iOS, Android and WP) is the lack of any hardware buttons at the front.

All you get below the display is the microphone pinhole, while above you'll spot the earpiece, the ambient light and proximity sensors, as well as the front-facing camera and the status LED. The LED alerts you of anything from incoming calls through BBM and regular messages, to the battery status and social network updates. You can selectively enable the events you need or disable LED notifications altogether.

There's no home button to let you wake up the phone without reaching for the power key, but the Z10 was designed not to need it. Instead, you can simply do a vertical swipe on the screen and the smartphone will wake up. Yep, that works right from sleep, which is one better than the Nokia N9's solution where a double tap wakes the phone up before you swipe to unlock it. If you are worried that you'll trigger the unlock by accident you can disable it from settings and use the Z10 the old-school way.

There are no buttons at the front

The heavily gesture-based UI means there are not too many controls on the sides either. On the right you get a couple of volume keys, separated by the voice command button. You can set the volume keys to double as music controls, allowing you to skip tracks. Sadly, there's no camera shutter key here.

The volume keys and the voice actions button on the right

The two connectivity ports are on the left - the microUSB and microHDMI jacks are both left uncovered, which admittedly doesn't look all that great. They're readily accessible, though.

The microUSB and microHDMI ports are on the left

The top of the BlackBerry Z10 features the secondary microphone, the 3.5mm audio jack and the power key.

A view from at top

The bottom is bereft of controls: you'll only spot a slit to place a fingernail and pull the battery cover open.

There's not much to see at the bottom

The pattern on the back is interrupted only by the 8 megapxiel camera lens, the LED flash and the BlackBerry logo. The logo sits right on top of the NFC transmitter, so it's an indication of the strongest signal point.

Flipping the phone over

Under the BlackBerry Z10 back panel rests the 1800 mAh removable battery and the two card slots - microSIM and microSD, the latter being hot-swappable. We are really glad BlackBerry didn't go for an embedded battery as more and more OEMs are taking this route recently. We'll know how good the battery is when we are done with the full review.

The BlackBerry Z10 offers a 4.2" display with an aspect ratio of 15:9 and WXGA resolution (1280 x 768 pixels). Those figures add up to a nicely sounding 355 ppi pixel density, which means the screen is tack sharp and you’d be hard pressed to discern individual pixels. It's not as good as the Oppo Find 5 and its 1080p 5-incher, but you'd have to be looking from way closer than feels comfortable to tell the difference.

The image quality is quite good, too. Contrast is good, viewing angles are very wide and colors are very lively. The Z10 is not the best in any of these aspects but it's close enough to the top to make everything on the screen look punchy.

The maximum brightness setting does seem a little low to us and there's no way for you to disable the automatic brightness control. The reflectivity of the screen is reasonably low, so we didn't have any issues with sunlight legibility. 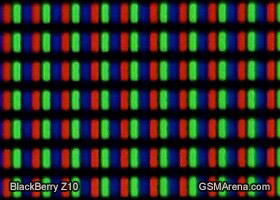