Good music player, but no equalizer

The UI of the BlackBerry Z10 music player is pretty similar to the image gallery and video player. It has three tabs, the first of which displays recently added and recently played music. The second organizes the music library by Artist, Album or Genre and the third one displays all the playlists.

The Now playing interface is pretty simple with a big album art in the middle, surrounded by playback controls (including shuffle and repeat buttons). If you tap on the album art (or drag it down) you get the current playlist so you can easily jump between songs (swiping left and right between songs doesn't work).

There are no playback controls on the lockscreen or the shade on top of the screen a la Android, you can use the volume keys instead. The volume up and down buttons change the volume for short presses or act as previous/next buttons if you long press them. The middle button is play/pause.

The BlackBerry Z10 put up a solid performance in our audio quality test, demonstrating a nicely clean output.

When you use the smartphone with an active external amplifier you get great scores all over the place. The frequency response was spot-on and there was no detectable distortion. The signal to noise ratio and the dynamic range are very good too and the only thing average was the volume level.

There is a pretty big increase in stereo crosstalk when you plug in a pair of headphones, but the good news is none of the other readings are affected. Volume levels remain average, but the overall performance is perfectly solid. 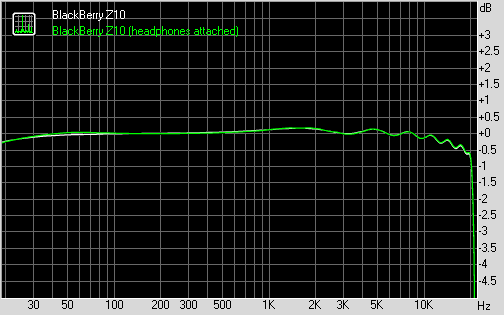