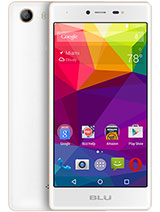 do not buy this phone!! too many glitches in the os! keeps restarting and won't connect to bluetooth in my new car!!

AnonD-582511, 09 Sep 2016 I had a problem where the power button fell out. I sent it back and it took the two months to... moreMy power button and volume buttons both fell off 😂

AnonD-565744, 29 Jul 2016My blu life on x just fell from the bed and the entire screen just shattered. WTF No way to g... moreYou can order a new screen online with all of the tools to replace it yourself. I found it for about 14 US dollars, and free shipping from AliExpress

I had a problem where the power button fell out. I sent it back and it took the two months to send me a new one. Now this "new" phone is worse. the touch screen is inconstant. having to push harder in places to get a response and at times the touch screen goes off on it own and starts pressing buttons all over the place on the phone. This wasn't a big deal if I kept the phone clean, wiping any oils of the screen, but I CANT RECEIVE GROUP TEXTS OR IMAGES!!!. The phone is MISSING SOFTWARE AND FREQUENCIES. My brother has this same phone, not a single problem I have had. It seems that their quality control in Non existent. AND on top of all of this it just stopped working. It dose not turn on at all. I open the phone to find the battery power connector is disconnected somehow and it wont stay in place. This phone is a piece of garbage and no one should buy it. NO ONE SHOULD BUY IT!!!

Good phone for its price the battery is really weak. I bought this phone thinking the battery would be fine but it drains SO QUICKLY! I left it on for 5 Minutes with the screen brightness down all the way and battery saver mode on and nothing running and it dropped form %100 to %99. Also this phone takes FOREVER TO CHARGE form 0-100 it took almost a whole night 6-9 hours. but the specs are great it runs smoothly and the screen is beautiful. The camera I find is slow and over sharpened. And video playback (from system video app) is so laggy you cant even watch any video. But youtube and other video streaming apps do work perfectly.

AnonD-570547, 10 Aug 2016worse phone ever. i only have room for 3 social apps a few pics, 1 video and 1 game. would not... more@AllieCat55
wait only three apps.. you do realise that you can add an SD card to the phone with up to 64 GB of space.. That would add more then enough room for thousands of pics apps and video.

I have had this phone for about 8 months and I love it. My only complaints are that it lacks a gyroscope (for Pokemon Go VR) and ever since I started using a bluetooth watch, the battery dies quickly(lasts about 10 hours for me with around 2 hours of internet and app use, the rest standby).

worse phone ever. i only have room for 3 social apps a few pics, 1 video and 1 game. would not go back to this phone

my sister gifted this phn tovme but within 2days it starded to get heat too much n of course!Its charging point is also weak...the power get down soon n it takes so long to get 100percent charge..then it fell from ma pocjet n its screen git scattered!now it can't be maintai!wat to do?

AnonD-397369, 19 Jul 2016it a very good phone specs are good works smooth and proper. Firstly the camera quality on the... moreHi, did you get the power buttom fixed? Mine fell off 2 weeks ago, I thought it was just bad luck but I see many people are having this issue.

Hey everyone! I bought my BLU Life One X in March and it was working perfectly fine till the end of May when it suddenly, out of the blue, just stop working. It randomly shutdown once so i turned it back on and then it worked for like 5 minutes only to shutdown again, it has not been starting up since. When I plug it in only a red light appears close to the front camera. Can anyone help me what I could do? Warranty? Troubleshoot?

need a phone, 24 Jul 2016hey should i buy the blu life one x or the blu vivo 5? My blu life on x just fell from the bed and the entire screen just shattered. WTF
No way to get it fixed. Just annoyed. Have no phone now and my country has no way of getting it fixed.

hey should i buy the blu life one x or the blu vivo 5?

it a very good phone specs are good works smooth and proper. Firstly the camera quality on the phone is very good and the front flash included take some really decent pictures and it run games like asphalt 8 very smoothly. it take very long to charge to 100%. I had my phone for 7 months then the power button falls off. then it start lagging even after factory reset. other than that its a goo phone for the price range and it come with lollipop which run smooth also. just need upgrade for marshmallow to fix the few bugs that it has.

Anonymous, 12 Jul 2016I had the same problem, but I removed 2 apps that were always on in the background & it fi... morewhen i get issues like that i power off then reboot in recovery mode (press volume up, down, and power at the same time). usually fixes it

I also have problems with this phone. Bought it in January 2016 and it's giving me so many problems where charging and retaining charge is concerned. Its a shame cause the phone works well when the battery is full. You cant even buy a new battery because it is built in.

buyer, 07 Jul 2016After a few months of using the phone, the battery stopped working how it should. The phone ch... moreI had the same problem, but I removed 2 apps that were always on in the background & it fixed the problem.