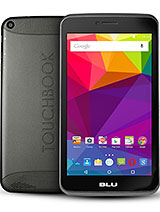 hello i bought a Blu touch book G7 tablet a bought its about 5 years ago and 6 months and i have been trying to install video games but it says that I need to Install a URL App but i dont know whats that is if you could please tell me that would be amazing.

hi I bought a touch book G7 but I'm not getting any camera ..keeps saying camera not connect ...wen I look for camera app there is not ...help plzz

Hi. I purchased my BLU Touchbook G7 from Walmart March 2016. As of October 2017 the apps started sticking, I'm not able to answer incoming call, I'm not able to make calls, the phone does not shut off when the power button is pressed, I can't shut off the alarm-every morning I have to stuff the phone in between mattresses (to quiet the noise) and wait 10 minutes for the alarm to stop. I contacted BLU cust svc, I was told since the warranty expired there's nothing they can do but offer me a small percentage off another BLU smartphone. I would like to give them another chance but, idk, I think I'm done with BLU.

Slow and unresponsive on apps like facebook, and messenger. I am not using cellular aspects of this. Glad I only paid $40 used for this dissapointment

I Like this Phone. The size is a bit intimidating, but once you get use to it, the big screen is nice. I use it on Wind Mobile in Canada and all functions work as they should. Remember, this is NOT a gaming phone. It will handle basic functions like email, text, surfing the web and phone calls. It does bluetooth, and GPS. I use Google Maps a lot and it does the job. Please note.... you need to take the time to set it up properly. "Out of the box", some of the settings need to be changed. Read the manual or check the default options.

The Cameras are not great. If you want hi-res photos or video look somewhere else. Remember that the ram is limited so memory needs to be managed a bit. There is some lag in performance when compared to a quad core phone, but if you can live with a couple of seconds for apps to fire up, you get a good phone for a reasonable price. It's not a Nexus phone and you shouldn't expect it to perform like one when it's 1/4 of the price.

Make sure you have your expectations in order before you buy.

Anonymous, 15 Feb 2016Its an Ok phone. True, the Cam sucks but everything else makes up for it. I recommend it to an... moreso you can hold it up to your ear like a normal phone

Its an Ok phone. True, the Cam sucks but everything else makes up for it. I recommend it to anyone who has a fetish for big screen phones. I suggest using a Bluetooth device if you're not a big guy like Shaq, you may look like you're holding a tab to your head.

Need a screen to bay

Anonymous, 02 Nov 2015Is 2MP not an older camera version?Hmmm no flash for such a nice model phone..camera need uograding

Is 2MP not an older camera version?