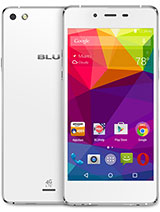 AnonD-483445, 02 Jan 2016Purchased this phone about a month ago because it's the thinnest/lightest in the world. So fa... moreI have to agree with you 100%
Everything here is spot on for high ed super phone genre save the ROM Expansion.
Okay clouding a great number of things is fine but the APPS can not be... I am sure they will rethink thins in future models. The only other 3 improvements I would look fr beside memory expansion would be better forward camera, increase processor a bit and switch t a micro ver a nano sim. I too had to butcher a micro card it is ugly.

put off the buttons from the screen!!!!!

AnonD-534627, 07 May 2016I had a similiar problem when the phone was charging and I chose restart it would not complete... moreAhem... every rooted Android device will brick if you get an ota update. Hmmmm...

Just HATED IT. Why did you (BLU) put the buttons inside the screen. No one likes it. What about all that unused space on the cell base. You just messed up what should be an improvement of BLU VIVO AIR. Just rather my old one. At least in my one, I have all the screen space for IMAGES, not for BUTTONS.

AnonD-534627, 07 May 2016I had a similiar problem when the phone was charging and I chose restart it would not complete... moreHi spirodave. I´m interested in rooting this phone but no method found in internet seems reliable. CAn you help me? Thanks in advance

Lars, 27 Mar 2016Great phone so far... but SD card slot door open so I can finish the install. This phone doesnt have a SD card door . It doesnt have expandable storage. I think u mean the SIM card door and in that case there is a tiny tool that comes with it in the box and makes it simple to open it. Hell i even cut a huge sim into a nano using a scissors and was abke to make it work even though i cut it very poorly. I had to jam it in there. Any questions please ask and if there really is a SD door please tell me where because I would be stoked to put my 64GB in but I think I ma dreaming because i see no SD door

Anonymous, 04 May 2016mj - had the same problem. Plug into charger. Hold power button - I had to hold for at lea... moreI had a similiar problem when the phone was charging and I chose restart it would not complete the reboot and get stuck. Easy fix though , just unplug charger and reboot. This could be fixed in an update. Word of caution, DO NOT TAKE AN Over the Air Update if you are rooted it will brick your phone. Be sure to unroot first. After rooting my phone and getting rid of the Bloatware(Aka system Apps that cant be uninstalled ) made my phone a beast. Like I said in another post besides of few of the minor things the $700 high end phones that ours dont , I like this phone as much as my Galaxy S7 and not to mention a Crapple Iphone. I got this brand new on Amazon for $85 . I just had to sign up for a Amazon Credit Card in which I cancelled right after purchase. This shows how much highend priced smart phones are overpriced. Once again root this beast and if you have questions on how to please ask cause there are multiple ways but I found one that works without any risk. Good Luck

Laczzy , 01 Apr 2016My phone as being messing up. it dose not recognize other sim cards right from the day but the... moreIs it 100% for sure unlocked? I tried 3 different SIMS and even a family mobile SIM which I did a horrible job cutting it with a scissors to make it into a nano. 1st step for me just like any Android phone was to root it and get rid of the Bloatware. I am getting great battery life and the phone may be lacking a few extras of the $700 phone market like infared and a super high quality camera but I still like it better than my galaxy S7. Even though other high end phones have 4K screens this makes up for it by having a smaller screen that the pixels arent as spread out so you get a impressive display. I love it but please root your phone and dump the bloatware and use Greenify App and you will love this phone. Im not sure why your Sim cards are having issues but I would take it to your carrier and see if maybe the APN settings need adjustment that is not being applied automatically. Good Luck

mj - had the same problem. Plug into charger. Hold power button - I had to hold for at least 2 to 3 minutes. Phone finally stopped looping and turned on. Fine since then.

My phone as being messing up. it dose not recognize other sim cards right from the day but the phone. so pls what can be the solution for it...

Great phone so far... but SD card slot door open so I can finish the install.

Same here! Phone wont charge because it keeps turning on and off when I try to charge it. Really need a fix pls...

have an unresponsive screen display works but does not respond to touch help please?

I bought the phone I'm but having an issue. It was dead battery and now it turns on to the black and white logo and slogan and turns on to the opening screen with the different colours etc. but immediately turns off again, what can I do? Please help me

AnonD-107303, 14 Jan 2016Just got mine and unfortunately its stuck in boot loop. It turns on then off. Cant seem to be ... moreI just posted a comment, same thing with me, RIGHT out box won't turn on. Good luck, this pos is being returned. Let me know if you got a fix and I might not send back next week.

POS! RIGHT out of the box, won't turn on, while charging it keeps flashing on and off the blu bold like us screen. What a joke, this company will go down if they keep making crap. Quality control is still necessary, especially to beat LG SAMSUNG, IPHONE ETC,

Just got mine and unfortunately its stuck in boot loop. It turns on then off. Cant seem to be able to go around it.
Very disappointed considering I have kept it charging for 1 hour.
If anyone experiencing the same, please drop a comment if you have a fix. Thanks!

Purchased this phone about a month ago because it's the thinnest/lightest in the world. So far I'm extremely impressed with it - the size is stunning, it's one of those devices that you just can't put down. Feels extremely well made and premium with the glass front and back and aluminum band around the outside, similar to an iPhone 5. It's been a long time since strangers have stopped me to look at my phone as now everyone has fairly thin phones with big screens. This one is definitely a crowd stopper.

I was worried about the slower processor and lower resolutions screen but neither are an issue. The AMOLED screen is stunning with incredible blacks and rich colors, people comment on it all the time. And while it has a slower processor never once has it lagged or felt slow, everything runs as smooth as ever and mine came with 5.0.2.

There is one big downside - it doesn't support AT&T 4G. You only get older 3G speeds so only have 400k (.4MB) instead of the 8-16MB I got on my previous Nexus 6. Even still it's fast enough for things like Google Maps and even streaming music but definitely no streaming video or downloading of big games. Even with that limitation I'm still in love with this thing. Finally 16GB of storage is a bit small, it would have been fantastic if it had a MicroSD slot but at this size they just couldn't I'm sure. Having a full 3.5mm headphone jack is very nice.