With the IFA approaching the Samsung Galaxy Note 4 inches closer to reality. Both versions of the new flagship hit AnTuTu – that's the Snapdragon 805 and Exynos 5433 versions.

The new Galaxy S5 LTE-A is the first device with Qualcomm Snapdragon 805. The new chipset updates the processor and graphics found in the 80x range to a quad-core Krait 450 @ 2.5GHz and Adreno 420, which promises to outperform the Adreno 330 by 40%. 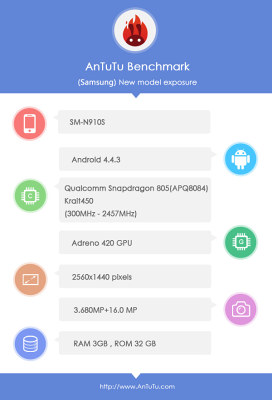 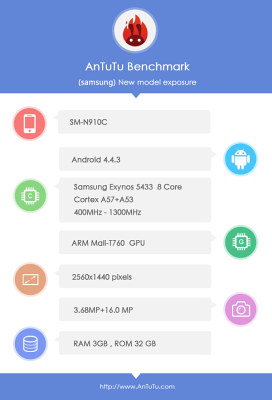 Both versions of the Samsung Galaxy Note 4 will have 5.7" Super AMOLED screens with QHD resolution. They ran Android 4.4.3 at the time of the test and pack 3GB of RAM and 32GB of built-in storage. The two different chipsets both support LTE Cat. 6.

The camera department boasts a 16MP main camera, presumably same as the Galaxy S5 (though we've heard talk of OIS) and a 3.68MP front-facing camera. That is the exact resolution of the QHD screen, so any selfie you snap with the Galaxy Note 4 it will fit at 100% on the screen.

IFA is the traditional home to the announcements of the next generation of Galaxy Note's and this year it starts on September 5.

This guy just forgot to mention that this note will come with a button that will allow this phone to "transform " into uss enterprise and will take you to Vulcan in 10 parsecs... Lmao