The render shows the Galaxy S20+ in what looks a lot like the Lilac Purple color of the Galaxy S9+. This Edition includes unique wallpapers and themes, along with special branding below the Samsung logo on the back, and a purple heart stamped on the camera glass.

Meanwhile, the BTS edition Galaxy Buds+ are essentially black Buds+ with purple touch surfaces, along with the special heart and logo branding. The Buds case itself is purple. Renders of the Galaxy Buds+ that we saw last week told us these Buds+ are “Mirror Purple” and this purple is a bit darker than the phone above, so we wonder if they will match more closely in person. 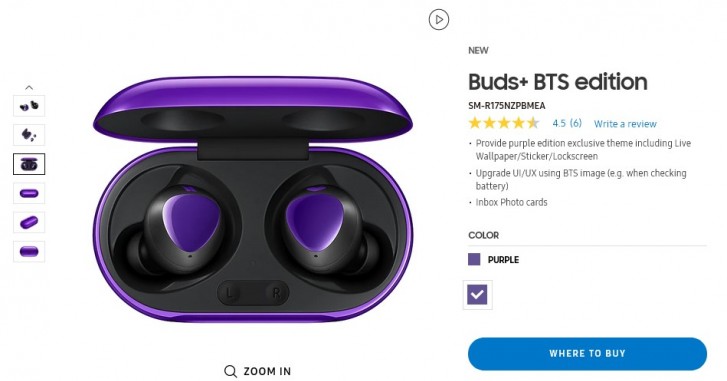 According to the listing of the Buds+, these earbuds will come with an exclusive “Live Wallpaper/Sticker/Lockscreen”. It will also use a BTS image throughout the Samsung Gear app such as when checking the battery level. Here’s the retail packaging for the Buds+.

The BTS Edition of both the Galaxy S20+ and the Galaxy Buds+ are expected to be announced at a special event on July 9. Samsung has already teased that pre-orders for these will open on June 19.

bts!! i want that phone

That is exactly what exynos flagships are.

Quite the over reaction there.