The phones take photos at vastly different resolutions ranging from 8MP to 38MP, which makes the comparison difficult. Using Nokia's super sampling camera mode the minimum photo resolution is actually 5MP, putting the Lumia 1020 at both ends of the scale.

To be able to compare them on even ground, we will resize them all to fit the same resolution several times and then make crops to compare the image quality at 1:1 pixel level.

So starting off with the 8MP comparison, it's obvious that the Nokia Lumia 1020 has the most pixels to boot. Despite having the widest Field of View (FoV) the Lumia 1020 pack the highest amount of fine detail. The photos don't have the heavily processed look of some of the competitors either, plus the dynamic range is very wide (look at the bush in the shade and the one in the sun).

On a side note, the Lumia 1020 also has a 5MP mode, but that throws out too much of the detail. Those photos are great to post on Facebook or email, but for your photo archive at home you'll want to save those 38MP shots. The phone can save both resolutions at once but that takes time and the 1020 is the slowest among shooters in this shootout. 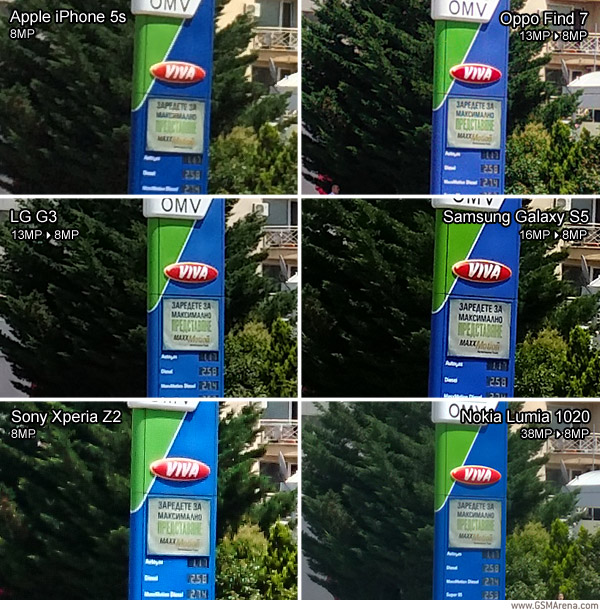 Back to the comparison at hand, the Oppo Find 7 photos also look pretty clean though there is some noticeable post-processing and the dynamic range isn't up to par. The letters and numbers aren't as sharp but overall the photos look great.

The Samsung Galaxy S5 is heavy handed with the processing - the sharpen stage is very strong (you can notice halos around edges) and the contrast has been artificially boosted, which makes the image look a bit fake.

The LG G3 is guilty of the same things but to a lesser extent. The pumped up contrast makes the shadows look exaggerated and the sharpening filter leaves clear halos. The LG G3 underexposes shadows but again to a lesser extent than the Galaxy S5.

Then there's the Sony Xperia Z2. We used Superior Auto so the phone had the opportunity to produce its own 8MP shot. Which turned out to be of no advantage despite the obvious advantage of starting off a considerably higher resolution (20.7MP).

The photos are on the overexposed side and the detail just isn't there, even the large "VIVA" sign doesn't look particularly sharp. The foliage of the bush looks more like digital artifacts than foliage.

The 8MP camera on the Apple iPhone 5s is practically Apple's pinnacle of engineering but it's already a resolution mark that's become tough to sell. The dynamic range is pretty good but colors are off (the "VIVA" sign appears more orange than red), but the biggest downfall is how soft the image appears compared to the others, even the Xperia Z2.

In this comparison we cropped out parts of photos without any image manipulation on our part whatsoever. We've used the source material just as it comes out from the camera. For the Sony Xperia Z2 and Nokia Lumia 1020 we used both their downsamplnig modes (to 8MP and 5MP respectively) and a crop from a full resolution image.

The 5MP mode of the Lumia 1020 puts it at a disadvantage - the numbers for gas prices become almost unreadable even though we know the camera resolved them perfectly well. With UHD TVs becoming more popular, Nokia should consider moving to 8MP shots (3,840 x 2,160 = 8MP). Still, the photos are sharp, with no noise and good colors. The contrast is a bit low for our taste, but that's a side effect of the wide dynamic range. Plus, you can use camera settings to adjust it to your liking as the Lumia 1020 is the only phone in this shootout with proper manual controls. 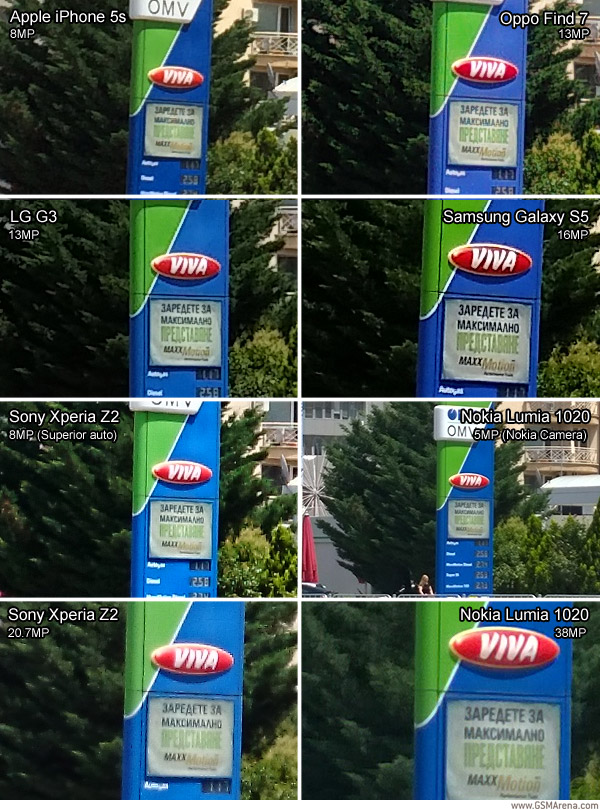 Photos taken at the Lumia 1020's native resolution seem to have undergone less processing, the colors aren't as saturated (a good thing if you ask us). Some noise starts to creep in and the image isn't as sharp but keep in mind no display can show 38MP photos at 100%. This though is representative of how 5MP photos will look at maximum zoom - as you can see it still compares well against the competition.

The Samsung Galaxy S5 pulls ahead in this comparison - the previous downscaling to 8MP lumped it with the 13MP shooters, but here at 16MP we start to spot the differences. Of course, a good part of the extra sharpness you see comes from the heavy post processing.

The LG G3 elbows out the Find 7 again in part due to heavier processing. The extra sharpness and contrast help the look of the photos though the shadows are slightly underdeveloped (we bet it's due to the boosted contrast).

The Oppo Find 7 photos look softer and we can still spot a halo under the shadow of the VIVA sign (from over sharpening), but it's a great showing from the new comer of the group.

The 8MP samples from the Sony Xperia Z2 and Apple iPhone 5s look even further behind now that we've done away with the downsampling.

The Xperia Z2 disappoints when you look at a native resolution photo. It's soft and full of digital artifacts, worse still it doesn't actually bring any additional fine detail. This means 20.7MP mostly waste storage.

So we move to the next comparison where we upsized all photos to 38MP, which is the native resolution of the Lumia 1020 shots. Here the Oppo Find 7 shot is actually downscaled a bit (to 85%) since we used its 50MP interpolation mode. 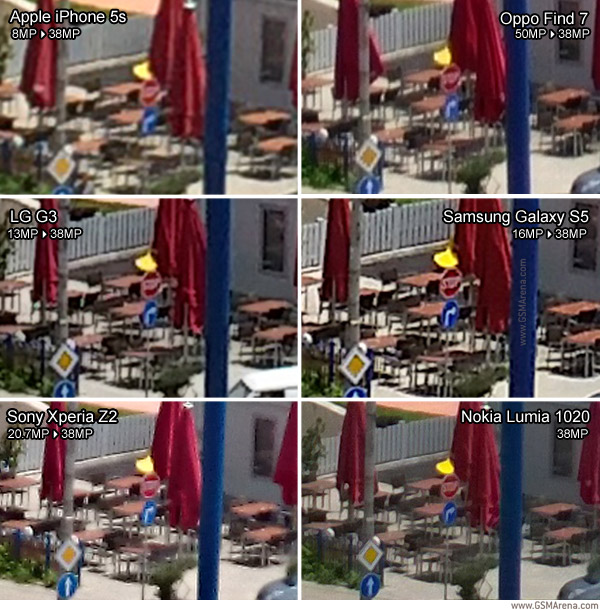 Quite expectedly, the Nokia Lumia 1020 comes out as the unrivaled champ. You can see the thin black lines of the right-of-way sign (yellow rhombus inside a white rhombus) and the STOP sign looks pretty good. There's some visible noise but nothing major. Also keep an eye on the white picket fence in the background, it's composed of separate planks.

The Samsung Galaxy S5 manages to capture that thin black line but it's not as clearly defined. Also the STOP sign is the most readable, but look at the shadows under the tables and chairs - they look very dark and surrounded with white halos.

The LG G3 dose a passable job of rendering the signs but the STOP letters and even white arrows look smudgy. At least the shadows aren't exaggerated like in the Galaxy photos.

The Oppo Find 7 once again provides relatively untouched shots. The so-called 50MP mode doesn't come anywhere close to the 38MP photo of the Lumia 1020 and things look blurrier than even in LG G3's photos. Again, a lot of that is due to Oppo using a low level of sharpening in post-processing.

Despite having a resolution advantage on all but the Nokia, the Sony Xperia Z2 fails pretty bad here. The signs are a mess and the white picket fence is almost a solid object (the separation between planks is barely visible).

The Apple iPhone 5s does the worst here but that was to be expected, 8MP isn't enough to render faraway objects with much detail. The planks are completely gone and the signs are very soft. Still, if you look at it and the Xperia Z2, the difference certainly isn't 12.7MP.

Here are the full resolution shots if you want to look at other parts of the scene or do your own upscale/downscale.