Still photography and video recording are different enough to warrant separate awards so that's how we've approached the final positioning of the phones. If you feel we've judged some too harshly, keep in mind those negatives stand out only against the very best smartphone cameras on the market. 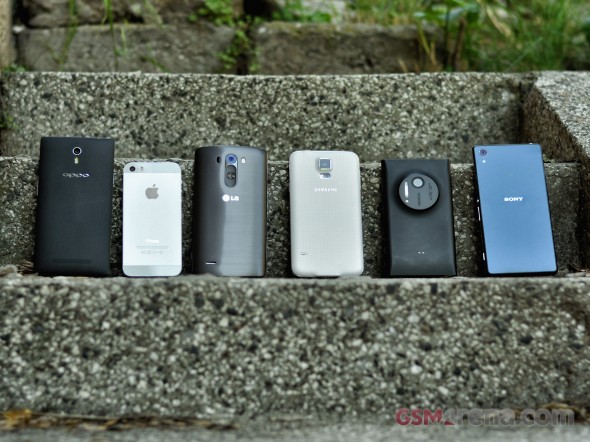 The Nokia Lumia 1020 still has it - it performs amazing when it comes to still photography, regardless of the lighting conditions. Even shooting against the sun works out well with the sensor's high dynamic range. Xenon flash, OIS and lossless digital zoom is a combo no other phone offers (unless we're talking the Galaxy K zoom hybrid). Just make sure it has a good focus lock before fully pressing that shutter key - we did find it struggle in the dark.

The Lumia 1020 doesn't do too hot for videos, largely limited by its hardware, which can't handle 60fps videos or 2160p. The large sensor gave it a push in low-light video capture, where it scored on top of the scoreboard, not to mention OIS, which always comes in handy in video recording.

The Samsung Galaxy S5 has to settle for second place in still photography - it consistently performed great, but not quite enough to topple the Lumia, especially with the lights out. Having a much sleeker body is a win in its own right though. The phone proved solid performer in the HDR and panorama tests.

The Galaxy S5 is our video recording champ - it produced the best 2160p video outside and surprisingly did very well when shooting videos in the dark (unlike when shooting stills). A solid still camera and great video camera make the Samsung the top all-rounder of the group.

The LG G3 was a consistent with its still photography but its performance was average compared to the rest of the pack. It produced the best-in-show panorama and had reliable focus in poor lighting conditions thanks to the laser focus feature. The dual-tone flash didn't turn out so hot as flash photos didn't have the best color balance.

The G3 videos were similarly good but not great. Having OIS is a boon but it doesn't make up for image quality.

The Oppo Find 7 still camera is so similar to the LG G3 that it's a matter of personal preference which of the two is better. Its photos undergo less processing, which will appeal to some, while the LG G3 photos are processed to appear punchier with pumped up contrast and sharpening. The Find 7 bombed in the HDR test but did poorly in the dark.

It certainly saved face in the video department, placing ahead of the LG G3 in both good and low lighting. The Find 7 is a bit light on extra video features, but it came close to the Galaxy S5. We can't excuse the poor audio though.

The Sony Xperia Z2 didn't live up to its 20.7MP promise and Sony's experience in making quality digital cameras. It took some good stills in the dark, but outside in the sun it's nothing to write home about. The HDR and panorama features were okay, but nothing special.

The Sony Xperia Z2 felt better when recording video (when there's enough light) and the unique live-streaming features will earn it some brownie points with a specific crowd. Still, there's a lot of work ahead of Sony.

The Apple iPhone 5s places last but it has nothing to be ashamed of - it performed surprisingly well in the dark and produced some seriously high quality panoramas. HDR photos came out quite natural but an 8MP sensor doesn't cut it among the 2014 flagship gang.

In the video tests its 1080p resolution held it back and it doesn't have any tricks to lean on like the Xperia or OIS like the Lumia. The audio capture needs work too.

In the Nokia camp looks have overcome camera specs and the newly released flagship, the Lumia 930, omits the camera hump of the 808 PureView and Lumia 1020 and the overwhelming camera specs that go with it.

There's a very good chance that by the next camera shootout it will be an Android on top of still photography, they already won the video race as a side effect of beefy chipsets and love of big numbers.

This means all eyes are on Apple - the iPhone needs a big jump forward in the camera department (both still and video) or it will fall even further behind Android and Nokia. Apple certainly has the cash and engineering talent to pull it off though.

As for Androids, it's no surprise that their makers are putting unique features to stand out of the crowd. The love of big numbers was bound to lead to excellent cameras eventually and some have pulled it off - Samsung has the best rounded camera, while the rest ran into some stumbling blocks.