So you like to take photos of your Lego creations or whatnot from up close? That makes two of us.

Looking at the first set of images you may wonder - was it the same fire truck in front of the iPhone 7 and the LG G5? It was indeed, but the iPhone and the G5 are on the two opposite sides of the color rendering spectrum - a very conservative (in this case maybe even lifeless) reproduction by Apple's latest and a cranked-up out-of-this-world flaming red from the South Korean side. Not all Koreans are alike, though - the Galaxy S7 shows that there can be varying degrees of vivid, something that the Xperia agrees with.

You'd probably want to be looking at other things in such scenarios, like the rendering of out-of-focus areas. The Galaxy S7 has the most pleasing bokeh of this bunch, we think - the G5's background isn't as smooth, and neither is the iPhone's which exhibits a paintbrush feel.

A little more of the same to illustrate our point, only this time in a slightly darker, mixed-light setting. If only the Xperia had managed to focus on the side mirror in one of our attempts.

Additionally, the Galaxy S7 is able to focus the closest among this bunch allowing you to fill the frame with smaller objects, compared to the rest. Not to mention that when it comes to focusing, the Galaxy S7 is the fastest of the bunch to lock focus in almost any scenario.

Closeup photo winner: Galaxy S7. The most pleasing bokeh, the fastest focus and the closest focusing distance make this an easy one to settle.

When it comes to pano photos, there are three excellent performers and a poor one, and you could probably guess which the black sheep in the herd is.

We've been rambling on for years how Sony's sweep panorama mode is both fiddly to work with and produces unimpressive results. While every other manufacturer has figured out a way to gauge the orientation and sweeping direction (them gyros and accelerometers might have something to do with it), on an Xperia you still have to select which way you'll be sweeping.

At least, for a few generations now the software has the courtesy of not adding a solid grey patch to complete the image should you decide not to do a full sweep. It's something, but it's not much.

The iPhone's panorama has long been one of benchmarks in the business, but this seems to have changed on the iPhone 7. While there is plenty of resolution and detail, colors are very desaturated compared to the previous-gen iPhones. Additionally, we often observed a striping or banding in the sky as the phone adjusted exposure while you sweep - it happens with uniform colors and you don't have to zoom in to spot it.

No such issues on the LG G5, plus even more resolution - what else can you ask for? It uses the full 5,000+ vertical pixel resolution of the sensor (when held in portrait) - the iPhone just doesn't have as many. The G5 seems to be unable to adjust focus constantly - parts of the image are in focus, while others aren't.

The Galaxy S7's sensor is also 4,032 x 3,024px, but it does manage to outresolve the iPhone7 in panorama mode. What sets the S7 apart is Motion panorama, which is a Motion photo taken to the next level - it continuously records the action as it unfolds and it can later be viewed on the phone as a panoramic video, with the accelerometer used for browsing around the scene. Unfortunately, we can't show you how that works here.

Then there's the Xperia XZ. Its panoramas are 1080px tall. Taking a closer look would reveal poor detail rendition and stitching problems too. Sony has a long way to go in improving this shooting mode. 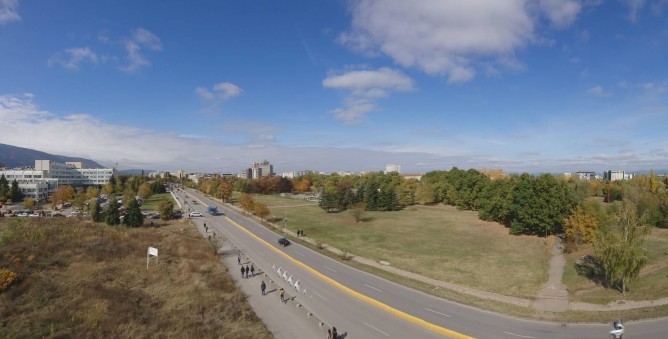 And here are a few more panoramas from our old location. Even if these weren't all taken at the same time, they do tell the same story.