The recording of 4K video or UltraHD or 2160p (however you decide to call it) is the norm in the top-tier segment, and not just any 4K video - these cameras should be able to record the best 4K footage for you to show your kids a decade or two down the line.

That's simplifying it a bit too much though. Other considerations include stabilization (optical, electronic, or the two working together), coverage, ease of use, video length caps. And when you're not planning to keep that cat video for future generations, a 1080p clip would do, but Whiskers still deserves its mischief to be recorded in the highest quality possible.

With the LG V-series taking smartphone video recording to a whole new level, the G5 has been stuck even without a 1080p/60fps mode - all its rivals here do support it. Meanwhile the Galaxy S7 can record in 1440p, which ideally matches its display resolution, but other than that, we see no reason to use it. 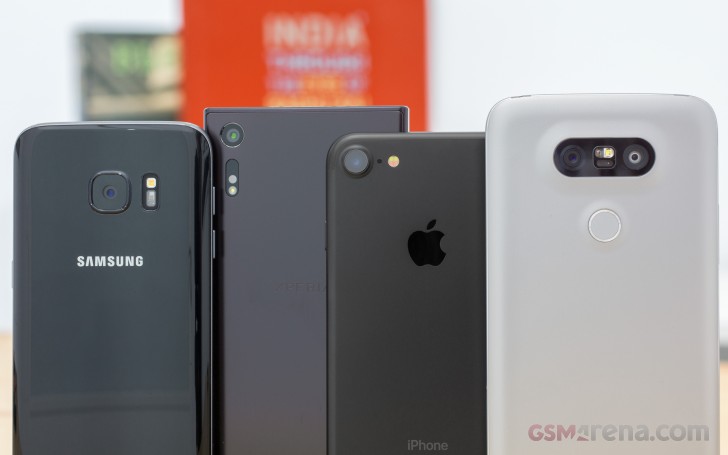 Few other limitations should be mentioned. Starting with the iPhone - the sooner Apple moves the resolution selector from the settings menu to the camera app, the better. Only we don't expect that to actually happen, of course. And a bigger beef we have with this camcorder - recording mono sound for videos is behind the times and certainly not befitting the price range.

The Galaxy S7 and the LG G5 suffer from the common viewfinder issue, especially the Samsung flagship - if you're shooting native 4:3 stills, you don't get to see what the video framing will look like until you hit record. Less so with the G5, which at least has a 16:9 sensor to begin with, but video does have a narrower field of view than stills, so keep that in mind.

While we're on it, forget about the lens focal length, it has nothing to do with video coverage. All phones crop, some even crop differently between modes - Sony's 4K mode is much narrower than 1080p. Typically the cropping is done to allow for electronic stabilization - only in Sony's case we don't get why 4K needs to differ from 1080p. 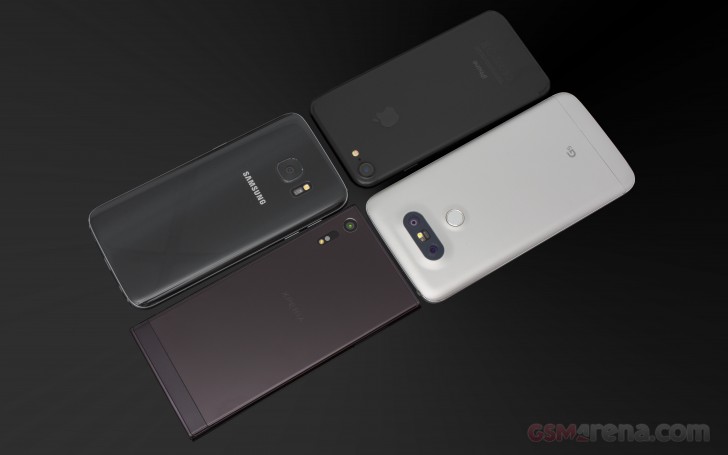 Then there's the matter of what stabilization works when. Makers tend to be ambiguous on the subject and just because a phone may have an optically stabilized lens doesn't necessarily mean it's being used when recording video.

Then comes the matter of when electronic stabilization is on. The iPhone seems to keep both OIS and EIS on at all times - Apple's way of denying you basic freedoms, but also leaving you free of worries whether you enabled stabilization, and what mode it's in. The G5 and the S7 only have EIS enabled in 1080p/30fps mode, not in 4K, but both phones still have the OIS running.

Everything has to be complicated on the Xperia, so Sony's SteadyShot has two performance tiers (in 1080p) and in 4K it can be used in Standard mode, or turned off, which is also the case in 1080p/60fps. In 1080p/30fps you get Intelligent Auto, which is way better than Standard. And if you happen to be shooting in that resolution, at that frame rate, and subjects match what the phone considers a macro scenario, the Xperia will enable its headline 5-axis EIS. Pretty limited use case if you ask us. In other situations it's a 3-axis implementation - just the three rotations.

We might be forgetting something but what was supposed to be a short preamble turned out much too long as it is, so let's move on to some actual video samples.

The Xperia records in the highest bitrate by far - 56.1Mbps vs. just over 48Mbps for the Koreans and 46Mbps for the iPhone. That supposedly means less compression and higher quality but also bigger file sizes.

The LG G5's videos are easily the sharpest, we gather that's in part why the smartphone secured such a decisive win in the blind shootout. And while sharpening has clearly been dialed up in processing (a little too much, really), there's actual fine detail that the G5 resolves and the others fail to. It's also the most contrasty video of them all. You do get the overly saturated colors from the still shots, but in this different medium they're easier to live with, maybe even desirable to some users. There is a moderate amount of noise in the trees for example, something the screengrabs in the blind shootout couldn't have revealed. Our bigger complaint though is that the variable compression level spikes when there are moving objects in the video and you can clearly see the rendition of the street's asphalt go through multiple pulsating adjustments based on the compression rate.

The iPhone 7, on the other hand, renders the scene the most naturally, and even if its footage appears softer, the detail is still mostly there.

The S7 scores points for its neutral white balance.

The Xperia XZ is struggling with focusing in what should be a straightforward scenario. Its videos have less contrast than the iPhone and are also softer overall.

Good light 4K video winner: Tie between the iPhone 7 and and LG G5. The iPhone produces the most natural rendition of the scene, with little digital noise. We wish it had stereo audio recording though. The G5 is the most detailed and contrasty, but also quite noisy and we hate the variable compression artefacts.

The iPhone keeps files small in 1080p recording with a bitrate of 15.5Mbps, while the others hover around 17Mbps.

You'd expect that the findings in the 4K section would apply equally well here, but that's not entirely the case. Color reproduction remains unchanged, for one. However, it is the Galaxy S7's footage that is the sharpest. Although the resolved detail is pretty much identical on the S7, iPhone 7 and G5, we'd have to place the G5 in third for the overall overprocessed look of its footage.

The Xperia XZ's 1080p videos are really hard to love, but on a positive note, the focusing isn't as eager and is much steadier in this resolution.

Here's the same scene shot in 60fps - other than the smoother motion, there's little to differentiate 60fps footage from 30fps, for better or for worse - except for the doubled filesize.

Good light 1080p video winner: Galaxy S7. Somewhat unexpectedly after the G5's win in 4K, the S7 snatches this one thanks to highest level of resolved detail.

What the G5 does, and what none of the others can dream of, is wide-angle video recording, both in 1080p and 4K. Take this for what it is - a creative tool that produces glorious-looking, if not technically perfect wide-angle videos, without the burden of bringing along an extra action cam.

In low light video recording, LG's outright refusal to apply almost any noise reduction seems to pay off. Sure, that results in a lot of noise, but also means a lot of detail manages to sneak past it - detail lost on both the Galaxy S7 and Xperia XZ in a push for less noise. The iPhone isn't as radical as the G5, but goes light on the noise reduction and strikes a reasonable compromise. You'd struggle to find much color, as we already established that's its MO when light is low.