Speculative renders of the 5" Google Pixel came out a while back, but our only glimpse of the 5.5" Pixel XL was a dark image that showed only the screen.

It seems that a case maker created mockups of the Pixel XL, presumably based on schematics they received. We notice the wide cutout near the camera - we wondered what that was about (no dual camera was ever mentioned) and it's still not clear. Could that be the loudspeaker, so close to the camera?

Stranger still is the Home button. A Google phone hasn't had a physical key on its face since 2010's Nexus S. And it's not a fingerprint reader, that reader is clearly on the back. 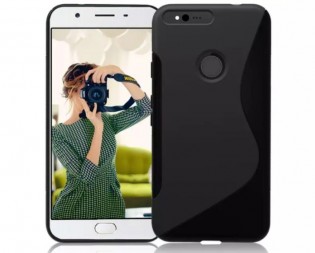 There is an explanation for this - case makers get only basic schematics and they have to make sure the cases fit the phones. So this might just be a "generic phone front" image (the case doesn't need to cover the front, so the schematics may not include details on that part of the design).

Now that pricing rumors has been outed, it is worth for me to reiterate that they might use the name change as an excuse for any drastic (and surprising) changes they could not have done to a Nexus device, even if it concerns the price. smh

I like the Android updating without stupid waiting, but the hardware was always so cheesy and inferior compared to competition it just never made even into a broad selection, let alone narrow selection in the end... Most of these Google phones look i...

No its different probably called border