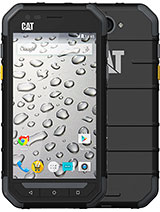 I bought S30 at the time because my old phone took some impact damage and I work as a contractor. I got myself a Cat S30 to be specific. Yeah sure its a good phone but the main issue, the speaker. Not so dust proof after all. I kept my phone in my pocket and obviously there is always a lot of sweat and dust build up in my pockets due to work conditions, so it is obvious the phone gets dusty and a bit moist. I used to be able to just wash it under the running water since it is "waterproof", but now it has come this far it is impossible to use the earpiece speaker to listen to the other person on the other side of the line since the phone is not as dust proof as it is marketed as.

hi my cat s30 if my phone is on lock screen cant receive incoming calls the phone does not ring ,if I take it of lock screen then it rings, what must I do...

Well I bay n cat phone brand new 4 days old get speker problems people can hear me but I cant hear them.What de hell.Cat have to be ashame to sell this to the world.No No No
I maen 4 days old.No No it is a No for Cat phones

Unfortunately, I sincerely wish that Cat would listen to us. I spent £230 on an S30, as a wheelchair user I'd been through several phones so this one was very welcomed! It's been run over several times without ill effect. However, as much as I love it, it's been relegated 18 months later to an emergency phone, because it kept dropping calls, the screen kept malfunctioning, and it refused to update itself. TV is was all happening before I even started accidentally running over it!! I sent it back twice and ended up taking it in a shop. It was explained to me that it keeps malfunctioning because 2.5gb of the 3gb memory was taken up by the apps installed on the phone, and it had run out of space to update the apps already on it, rendering it useless!! I ended up having to buy another phone. You really do need to listen to people, cat, we need a bigger phone memory to enable the phone to work properly. It can't be that hard to sort out! I'm very sad, I would live to keep using it but it's only good for basic calls and texts now.

I must concur with the comments on your site, this phone is a nightmare for previous Samsung users, it freezes continuously, phones on its own, I honestly have no good experiences with this phone and would gladly pay in to upgrade to a new phone. This is tantamount to extortion. What will cat do to help us.

Big g, 10 May 2017I was going to buy the cat s30 would you recommend itNo don't buy the Cat S30 or S40 Mine went in for 8 times for switching off by itself. After that they swop it for a Cat S40 that does exactly the same. It's nie now in for the second time. I'm so frustrated don't make the same mistakes paying for a phone that's in the shop all the time for repairing

Marius, 24 May 2017Do not buy this piece of crap! It was supposed to be durable but the protective 'glass' is a w... moreI agree this is a piece off crap.. Sinse the day I bought it only problems
now I have 1 year left on the contract phone going in to repairs for the 4th time
and all they say sorry it's the hardware.

Ive been using my Cat S30 for nine months. Had quite a few issues with it. Overheating and sometimes the screen wont work when I want to answer calls. Low memory is a constant problem. Two days ago I dropped the phone from my pocket to the floor and the screen cracked. Wont recommend a cat phone at all!

Real tough phone but thats all, poor wifi range, bad camera, slow as hell, re boots from time to time touch goes crazy from time to time not allowing you to awnser by swiping id say its way to expensive for what you get.

Do not buy this piece of crap! It was supposed to be durable but the protective 'glass' is a worthless s**t. It got scratched by a kids tooth! Slow as hell, can't install anything because the updates eat up all of the internal storage and you cannot make the phone download or install anything on SD without rooting it first. And good luck with rooting this junk.
I will never buy a CAT again even if they pay me for it.

I have the CAT S30 with Android Lolipop 5.1. The hardware is as tough as nails but that's about it. The software is slow, updates mess up the icons (removes and misplaces them), the UI resolution is bad, and the camera is the most awful of any modern smartphones. If you want a sharp-resolution phone screen and quality photo and video recording, look elsewhere already.

DO NOT BUY THE CAT S30!
This is probably some of the worst buy I've ever done. Ever since I got it from the store it has been freezing, and turning itself off and on on its own. I've sent it to service 4 times in about 5 months, but it's the same every time it gets back. There are also terrible storage space for apps, etc. I bougt a memory card to fix it, but I can't find a way to transfer nothing but media files to the memory card. DO NOT BUY THIS PHONE!

Anything what i doing it following me.

I tried more times remove it but nothing.. :/
Please!
Thank you. :)

I have Bluetooth problems after only 6 months doesn't want to connect to any Bluetooth device... Any thoughts?