There’s a new Mortal Combat movie on the way, it will hit theaters and HBO Max on April 16. This inspired Caviar to create a trio of customized iPhone 12 Pro and 12 Pro Max phones based on three characters from the movie and the game that it is based on.

First up is one of the most recognizable characters of the series, Scorpion. The back features Scorpion’s signature weapon, made out of strong titanium and covered with gold-colored PVD coating. There are also decorative inserts made out of fiberglass (G-10 laminate) and epoxy resin.

Next is Shao Kahn – or rather his titanium throne set on a black base made out of a resistant composite material. Upon the throne is Kahn’s signature war hammer (made out of wear-resistant super-heated titanium coated with PVD) and a skull that symbolizes the fallen enemies.

Finally, Shang Tsung, the final boss of the original game. Tsung was featured in the original movie and will be in the reboot as well. The back represents the evil sorcerer stealing the soul of a defeated enemy. His signature phrase, “Your soul is mine”, is written with a glow in the dark material.

The back is made out of titanium with a durable PVD coating and also has a 3D hand and skull. Two snakes are wrapped around the skull, their eyes are made out of four high saturation emeralds. 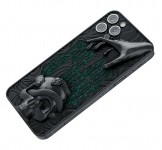 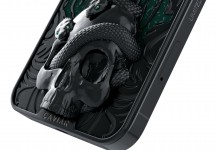 The Scorpion model starts at $6,140, the Shao Kahn is the priciest at the three at $6,910. The price varies depending on what iPhone 12 model you pick (Pro or Pro Max) and how much storage you want. Only 99 units will be made out of each model.

For more details, check out the official site.

So will my magsafe wallet work with this?!

Tesla to unveil final part of its Master Plan on March 1 Huawei-backed Seres 5 to be the first EV with semi-solid state batteryPorsche is working on a seven-seat crossover EV for 2027, codenamed K1
ADVERTISEMENTS