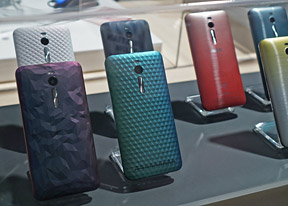 Asus kicked off with Windows tablets, but it saved the best for last - two new Zenfones, one of which is a $200 LG G3 alternative, while the other is a slender camera hybrid. The Zenfone 2 and Zenfone Zoom are based on the same hardware platform and a more zen Android 5.0 Lollipop. 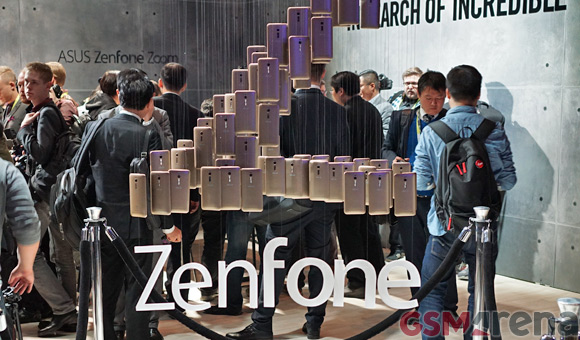 The Asus Zenfone 2 - just 2, no 4/5/6 this time around - is the follow-up to the popular line. With narrow bezels this one is more compact than the Zenfone 6, but Zenfone 4 owners will be disappointed.

If they can bear the 5.5" phablet though, they may be the first among their friends to have 4GB of RAM in their pocket. The Asus Zenfone 2 uses a quad-core Intel Atom Z3580 processor (Z3560 in some regions) and runs Android 5.0 Lollipop with the latest ZenUI from Asus. Note that in some regions the RAM is cut in half, 2GB (and that's the $200 version, of course).

The Asus Zenfone Zoom bumps the thickness just a touch - from 10.9mm for the Zenfone 2 to 12mm. It packs on extra weight because it's carrying a 3x optical zoom lens with stabilization. It's a 13MP/1080p camera, same as on the non-Zoom, but the lens adds a lot of versatility to the camera.

Both phones feature manual controls for photography buffs and the Zenfone Zoom can pack as much as 128GB of built-in storage.

Alongside the Zenfones, Asus unveiled three convertibles - half tablet, half laptop, the Transformer Book Chi trio is based on Intel's Broadwell chips and run Windows 8.1.

I am waiting Zenfon 2 in Malaysia