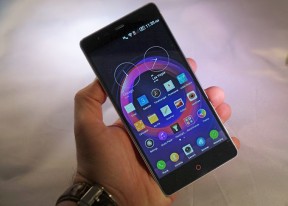 After the Nubia Z7 flagship phablet comes ZTE's smaller premium offering - the Star II. Its screen diagonal stretches to 5" with a resolution of 1920 x 1080px, which produces a stellar pixel density of 441ppi.

The ZTE Star II shares the powerful insides of the Nubia Z7 with a Snapdragon 801 chip with a quad-core CPU clocked at 2.3GHz, the Adreno 330 graphics chip but "just" 2GB of RAM. Built-in storage sits at 16GB but can be expanded with the help of the microSD card slot. Imaging is handled through a 13MP main camera on the back and a 5MP one on the front. Video maxes out at 4K at 30fps.

The ZTE Star II has a complete metal chassis with chamfered edges. It feels great in hand and offers high-quality materials. The bottom and top are rounded and feel comfortable while holding the device in hand.

At just 140.3mm tall and only 6.9mm wide, the ZTE Star II is pocketable with good ergonomics.

The 5" screen offers great viewing angles, punchy colors and is quite sharp, rivaling the best of panels out there.

Alongside the Nubia Z7, the Star II offers ZTE's latest user interface with colorful custom icons, eye-catching animations and no app drawer. ZTE's system-wide voice control is here as well, enabling you to change all sorts of settings or launch apps on the Star II.

The smallest in features happens to be the biggest in size. ZTE's new Grand X Max+ is the successor to the Grand X Max and is going exclusively to Cricket in the US on a $199 retail price without commitment.

Like its predecessor, the Grand X Maxx+ flaunts a 6" front-end of 720p resolution, a midrange Snapdragon 400 chip with 2GB of RAM, 16GB of expandable storage and a surprisingly big 3,200mAh battery with Qualcomm Quick Charge 1.0.

The Star II also sports a 13MP/5MP duo of snappers although it shouldn't be directly compared to the OIS f/2.0 13MP shooter of the Nubia Z7. The ZTE Star II also maxes its video recording at 720p, not 4K, but that's to be expected given the sensible price tag.

The ZTE Star II offers a nice build for the price. It's understandably not up to par with its higher-end counterparts but doesn't feel cheap either.

The 720p resolution has been stretched rather thin over the large 6" screen diagonal but is still sharp enough. Colors are also good and thankfully, so are viewing angles.