The Oppo N3 has a 3,000mAh battery and comes with a massively powerful 25W charger. It's chunkier than other chargers, but it delivers the power at 5V, while others use a higher voltage. This is because Oppo charges multiple cells, a single one can't handle that much current.

The Oppo N3 wasn't the fastest to reach 100%, it took it an hour and a half, but the phones that finished ahead of it all have smaller batteries. In just 15 minutes the N3's battery was one third full, which is enough to last you over 4 hours of talking, 2 and a half hours of web browsing or 3 hours of video playback.

Considering the relatively large battery in the N3, it was impressive to see it 68% full after just 30 minutes. You can work it into your morning routine - by the time you're done eating breakfast, the Oppo will have enough charge to last the day even for heavy users. 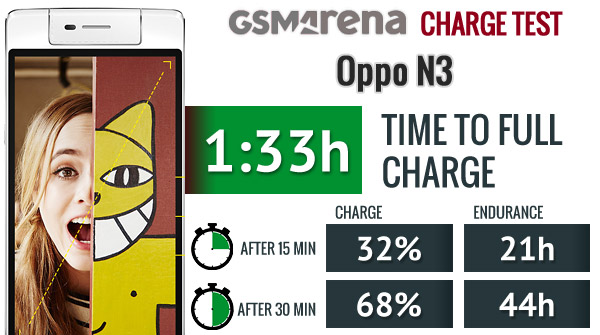 The Samsung Galaxy Note 4 packs a 3,220mAh battery and comes with the same 9V/1.67A charger as the Galaxy S6 duo. It supports the same charging tech too, so it took a bit longer to reach 100% though those 700mAh didn't prove to be that much of a hurdle.

After just 15 minutes of charging you can get a lot done - over 6 hours of talking, 2 and a half hours of web browsing or four hours of video playback. Still, after 15 minutes the charge in the Galaxy Note 4 and the Galaxy S6 batteries was equal in terms of milliamps. 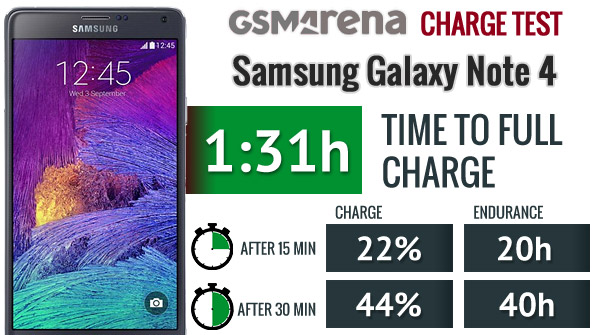 The Samsung Galaxy Note Edge has a 3,000mAh battery, this time the curve takes toll on the battery unlike the Galaxy S6 edge and its two curves. Still, the phone took basically the same time to charge.

The Galaxy Note Edge has a lower endurance rating, so you don't get as much out of it after 15 minutes. You can do about 4 and a half hours of talking, just under 2 hours of web browsing or a bit over 2 hours of video playback. 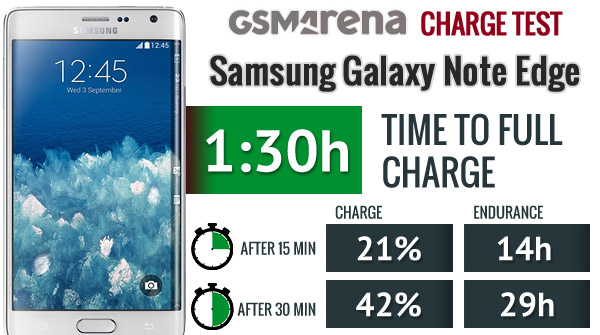 Apple's first phablet, the iPhone 6 Plus, has nearly double the battery capacity of the iPhone 6. This made the charge time even slower, taking over 3 hours to reach full charge. That's not twice as slow as the iPhone 6, but still the slowest charge in the group.

The faster than expected charge time is due to the falloff in charge speed - it took more milliamps to get the iPhone 6 Plus to the point where it has to slow down. After 15 minutes you get just under 3 hours of talking, an hour of web browsing or 1 hour and a half of watching videos. 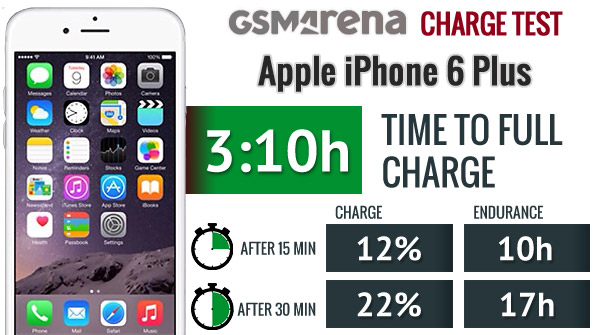 Next we hooked up the iPhone 6 Plus to an iPad charger (5.1V/2.1A), which cut down the charge time by an hour. Even short charges were much more helpful, getting the battery half full in half an hour - great if you're in a hurry. Still, the other phablets finish about 40 minutes quicker and have more charge after the first 15/30 minutes. 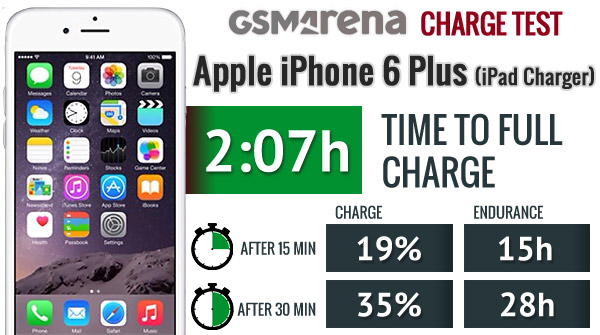 The Asus Zenfone 2 is the only Intel-powered device in the mix and while its charger works at 9V, it pushes out 2A instead of 1.67A that the Qualcomm's Quick Charge 2.0 uses. The Zenfone 2 has a 3,000mAh battery and it lived up to the promise of BoostMaster tech - 60% charge in 40 minutes. We couldn't get it to boot after 5 minutes, but it did power on at the 10 minute mark.

Five minutes after that, it had enough juice for 4 hours of talk time, 2 hours of web browsing or 2 hours of video playback. The charger does a great job of filling the battery, but the Zenfone 2 is quite power hungry so 15 minutes of charge is probably not long enough most of the time.

Update: We retested the web browsing battery life with Chrome instead of the Internet app and the score improved, so we updated the numbers here to match. 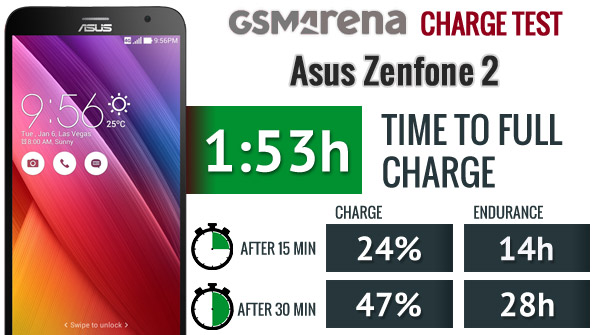 The Meizu m1 note comes with a standard 5V/2A charger to feed its capacious 3,140mAh battery so charging takes almost three hours. It's faster than the iPhone 6 Plus despite the slightly larger battery, but it still takes twice as long as other phablets.

The m1 note drains a lot of power in calls so 15 minutes of charge gives you less than an hour and a half of talk time. The phablet's battery life for web browsing and video playback is quite good, but the slow charger manages to put only about an hour's worth of charge for both. 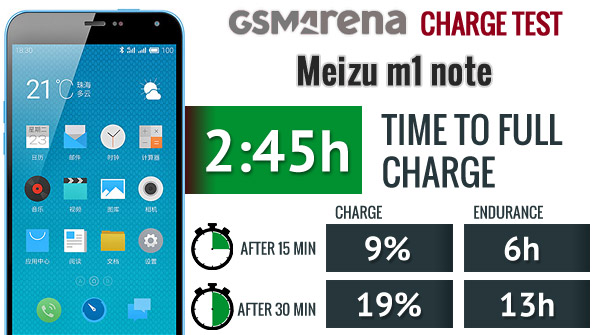