Oppo has upgraded the Find 5 flagship for China Mobile with a faster chipset. Previously the Oppo Find 5 was powered by the Snapdragon S4 Pro with a quad-core 1.5GHz Krait processor and Adreno 320 graphics with 64 ALUs (arithmetic logic units).

Now Oppo has replaced the S4 Pro chipset with Snapdragon 600. It has four cores of the upgraded Krait 300 architecture clocked at the higher 1.7GHz and the same Adreno 320 GPU but with 96 ALUs. 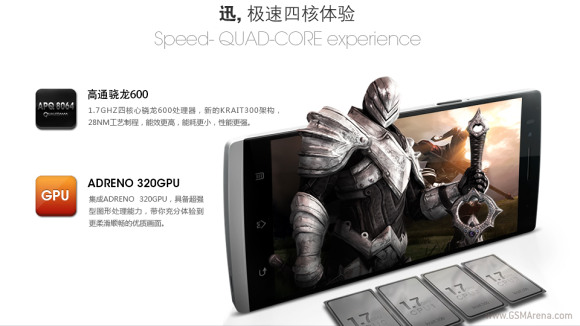 The rest of the specs remain the same - a 5" IPS 1080p display, 2GB of RAM, 13MP camera and 16GB non-expandable storage. The Android version has been updated to 4.2 Jelly Bean. Naturally Oppo's proprietary user interface is on top of it.

Despite the upgraded hardware, the Oppo Find 5 price remains unchanged.

That's absolutely untrue, the difference between Snapdragon S4 and Snapdragon 600 is just dramatical (around 25% overall). I know what I'm talking about, I own one and the S4 just doesn't catch up.

I want to buy it asap! But can't find a store that sells such... Shut up and take my monkey

Not having a SD slot card is a big minus. A better pricing would really help the sales.