ColorOS 7 to be unveiled on November 20

Chinese phone maker Oppo launched the ColorOS 6 last November, and now the company has announced that it will detail its successor - ColorOS 7 - on November 20 at an event in Beijing, China.

Oppo hasn't divulged much about ColorOS 7, but this custom skin is expected to be based on Android 10 and come with a system-wide dark mode, focus mode as well as gaming and performance improvements. 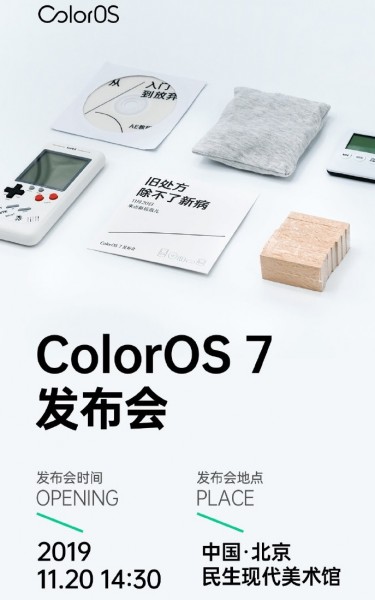 The complete list of devices eligible for ColorOS 7 upgrade will be likely revealed on November 20, but the company VP has already confirmed that Oppo Reno 10x zoom will be one of the smartphones getting ColorOS 7.

In addition to Oppo, Realme smartphones will also get ColorOS 7, but it will be different from what Oppo devices will run since it will be close to stock Android.

Realme is holding an event in New Delhi, India on November 20 where it will announce the X2 Pro for the Indian market, but alongside that, it's expected to expand its ecosystem with a fitness band and a power bank with VOOC support. We will hopefully know more about the ColorOS 7 (Realme Edition) at this event.

ColorOS, now available in a brick.

Yeah I also can't wait to use it on my DVD