Market research firm comScore has released its latest numbers for the US smartphone market revealing a gain in market share for Apple's iPhone as well as iOS.

As per the report, the Cupertino company's market share in the three months ending May stood at 43.5%, up 1.8 percent point from the 41.7% share it had in February this year. While Apple claimed the top spot, Samsung came in at second position with 28.7% share, up just 0.1 percent point. All others in the top 5, including LG, Motorola, and HTC, saw their market shares decline.

In terms of mobile OS, Google's Android retained the top spot with 52.1% market share, down from 52.8% it had in January-end. On the other hand, Apple's iOS - which also retained its second position - increased its market share by 1.8pp to 43.5%. Microsoft, BlackBerry, and Symbian rounded up the top five with 3.0%, 1.3%, and 0.1% market shares, respectively. 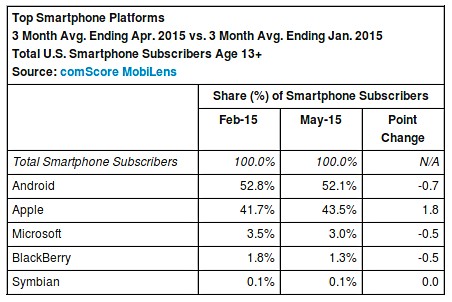 does not help "the fact"

Just to reiterate, Comscore and Kantar measure two different things: Kantar measures sales data for specific period of time. In most recent survey, it had measured from March to May 2015 in US market, finding Android is gaining. Meanwhile, Comscor...