Update: Apparently, the rumor is false, as evidenced by a tweet from company co-founder Carl Pei. Original article follows.

A mini version of the OnePlus 2 was rumored throughout its existence, and instead the OnePlus X was born, which wasn't exactly the same thing. Mini flagship lovers have been left out in the cold completely after Sony scrapped the Z-series and the Xperia Z5 Compact is the last one to cater to that demographic (plus the iPhone SE, but that's a different little beast).

Well, OnePlus might be filling that niche after all, if this new GFXBench listing is any indication. A 4.6-inch FullHD display is enough to capture mini fans' attention, and the Snapdragon 820 plus 6GB of RAM should get them drooling. The 64GB of storage (53GB left to the user, apparently) sound pretty good too. 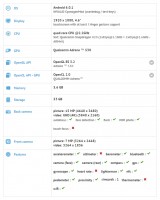 Why would the 'unknown' be a OnePlus device, you ask? The clues are in the 'INVALID CyanogenMod' OS - a remnant of time past, when the two companies worked together on the OnePlus One. It's not just that, though, the 16MP primary camera resolution, (4,640 x 3,480 pixels, precisely) is the same as the one on the current OnePlus 3.

Of course the road from a benchmark listing to a working retail device is long and rocky, but one could only hope.

I would love to have the phone in 5" segment because the size is perfect and handy just like my OPX. Its wonderful. Rear and Front side should be covered with Gorilla Glass 4. Keep the price aside. And yes Octa core would be an added advantage as it ...