Could this be the Nexus Prime hiding behind a Galaxy S II?

A tipster sent us something interesting - supposedly a size comparison between the Nexus Prime and the Samsung Galaxy S II. Now, the photo is taken in such a way that there's no way to say for sure that it's really the Prime, but then again rumors are rarely certain.

A lot of sources, including an industry insider that contacted us, state that the Nexus Prime has a 4.65" display, bigger than the 4.3" screen of the Galaxy S II. Also, the screen res is reportedly 720p, which gives it a 16:9 aspect ratio instead of the 15:9 ratio of the S II screen, so you'd expect the phone to be about the same size but slightly longer.

Which is exactly what we see in the photo. Also, we've heard that the display on the Nexus Prime is curved (just like the Nexus S), so we wouldn’t be surprised if the top and bottom are rounded the same way. Mind you, the Nexus S is slightly shorter than the Galaxy S II, so that's not it in the photo. 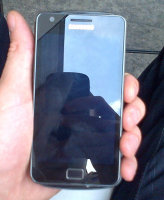 Of course, there's a big chance that this photo doesn’t show the Nexus Prime at all - just take it with a pinch of salt and wait until October, when the Nexus Prime should launch according to the majority of rumors.

We hope you do too.

I hope you do.

I hope you learn English better.