Counterpoint: 53% of Indian premium phone buyers planning an upgrade in the next year

The majority of Indian premium phone owners are considering upgrading to a new phone in the coming year according to Counterpoint’s report, which was based on 800 respondents. The premium segment was defined as phones priced above INR 20,000 ($280). Additional data shows that people in that price segment typically keep devices for 25 months. 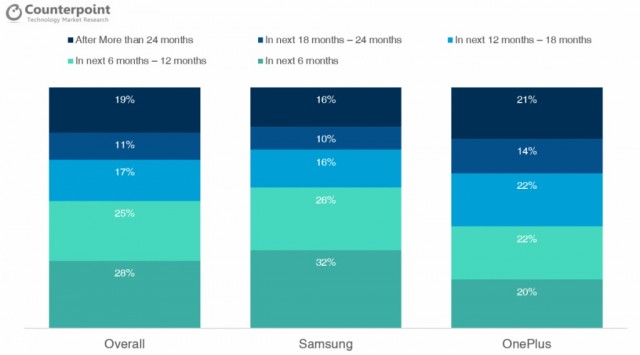 According to Counterpoint's data, Samsung and OnePlus are the two leading choices in the Indian premium segment with Samsung users replacing their devices faster than OnePlus owners.

Another key part of the survey involved the must-have features for which consumers are willing to pay more in their next device. Chief among them is dust and water resistance closely followed by an in-display fingerprint reader and facial recognition. Other popular features are more powerful rear cameras and punch hole displays.

Are we still talking about planet Earth?

samsung got you covered

This is not much of a news. Many people -if not all- is regularly upgrading their phone every other year or so. Why keep uodating most news to one country's people?