Counterpoint: Nokia climbs to 4th place in US smartphone market

Nokia has struggled to get into the US market for years now, but it seems that its hard work is finally starting to pay off. Counterpoint Research reports that in Q3 of this year Nokia leapfrogged several makers to reach the fourth spot among smartphone vendors in the US.

This sounds less impressive when you look at the numbers - Nokia holds a smidgen over 4% of the market. But you have to look deeper - in Q2 this year, Nokia was at a 1.4%. It took it almost year to get to that point, in Q3 2012 Nokia barely registered at 0.7%. 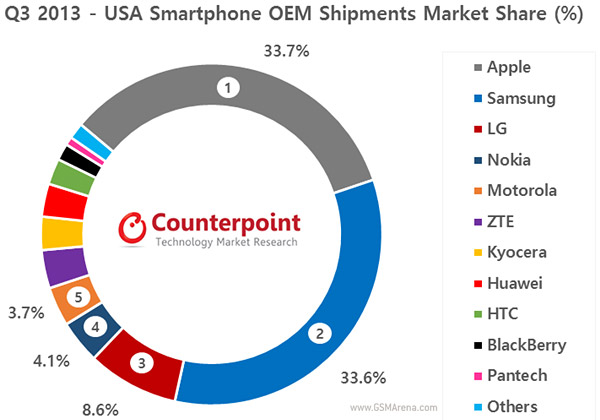 So in three months Nokia more than doubled its market share and is now ahead of former leaders like Motorola, BlackBerry and HTC. Counterpoint attributes this success to Nokia’s carrier exclusivity strategy, which is finally starting to work.

Carriers get different devices - e.g. AT&T got the Lumia 925, while Verizon has the Lumia 928. AT&T has 5 Lumias at the moment (including the best-selling 520), T-Mobile has three (among which the 521), Verizon has two and two pre-paid carriers (MetroPCS and Aio) have one each.

Beyond Nokia, the US smartphone market is very homogeneous - Apple and Samsung are nearly even with a third of the market each. Apple has a 0.1% lead but has barely grown in the last year, while Samsung has gone 10 points up from 26.6% in Q2 2012. The next biggest vendor is LG in third place with 8.6%.

obviously, they are part of "Others"

Ya I was about to ask the same question