The smartphone market recorded a decrease in shipments in 2019, and this affected the refurbished segment as well. According to Counterpoint Research, manufacturers sold 137 million refurbished devices (9% of total sales), which is a 1% decrease on a yearly basis. Markets like Europe, China, and the United States saw a decrease, while India, the LATAM region and Africa saw an increase. 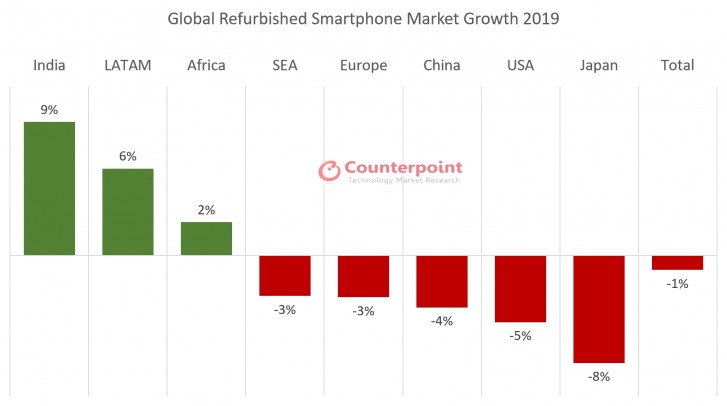 Jeff Fieldhack, Research Director at Counterpoint, revealed this is the first time in four years the refurbished market has declined for the full calendar year. The trend is changing since many consumers prefer to go for a cheap new smartphone and there are a lot right now at key markets like the United States and Europe. There are also factors like a sluggish economy and the lack of proper ecosystem for refurbishers to make a profit.

These types of devices are still preferred in underpenetrated markets like the LATAM (Latin America) region where you can have a premium device at an affordable price. However, growth in such markets will be heavily impacted by the COVID-19 epidemic and we should expect a further decline in 2020.

Refurbished smartphones usually are new devices that are eventually returned due to malfunction, which is later repaired. The difference from a used smartphone comes from the fact that the manufacturer is testing and restoring the handset to factory-standard operational condition.

not just that, often last years flagship too. why would someone buy a refurbished and used (albeit malfunctioned once) phone?

Best camera and software? That is one big claim there.

Google Pixel 3A XL is available at affordable prices at many places with decent hardware and best camera and software.