While we've been waiting for HTC and Google to announce an 8.9" Nexus tablet we've been treated to more than one leak about the coveted Nexus 9. The latest one is from hardware-assessing app CPU-Z, which confirms the SoC in charge of the tablet is the latest Nvidia Tegra K1 64-bit.

We've already suspected the tablet will carry a 64-bit Nvidia chip and with two leaks behind it, the rumors seem plausible to say the least. 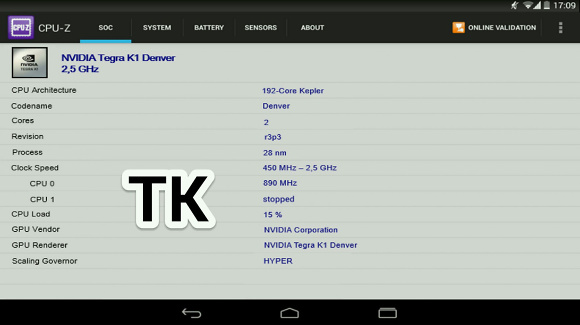 The Tegra K1 inside the Nexus 9 will have a top clock speed of 2.5GHz which is higher than the 2.2GHz non-64-bit Tegra K1 we benchmarked and found to top our charts, especially in the graphics department.

Nvidia claims its Tegra K1 chip is 1.5 times more efficient than its competition which should translate into reasonable battery life despite the immense power within. The Tegra K1 has a 192-core GPU based on the desktop-grade Kepler architecture and Nvidia's Cuda cores.

Thankfully HTC is making the Nexus 9 so build quality will be really great.

Dang this tablet is looking great so far. hope it will happen. FG