CR: Chinese market accounted for nearly half of all 5G smartphones sales in 2019

Huawei and Honor were the only two major players to see shipment sales growth in China throughout 2019 with a combined increase of 28%. Apple (26%) and Xiaomi (22%) had the steepest declines, followed by Oppo (12%) and vivo (6%).

Counterpoint also points out the effects of the Coronavirus on the Chinese smartphone market could be even more severe in the coming months as supply chain disruptions and labor shortages can result in a 20% drop in smartphone sales in Q1 2020. Lenovo and Motorola who have factories in the Wuhan region where the virus originated are expected to be severely affected. 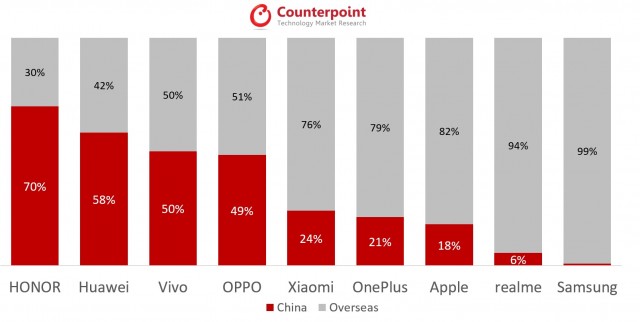 Going forward, Counterpoint predicts a continued decline in smartphone shipments for the Chinese market which may go down by another 5%. The outbreak is expected to be contained by March but the detrimental effects on supply chains and procurement will result in declines for both Q1 and Q2.

take china telecom s package for instance , the family plan for 5G is same as the 4G, just need to update the phone

I guess the vast majority of them as they are mostly in China. Even if you don't sign up for a 5g package you can use 5g at capped speeds in China if you gave a 5g capable phone. 5g packages in are actually cheaper than current 4g ones though if you ...

Ok I guess. It would be much more interesting to know how many of those 5G phones are actually using 5G.