Here's what the Samsung Galaxy Note 4 may look like. While looking very similar to the front of the current Note 3 the back and sides look new.

The phone appears to retain the plastic back with leather-like texture but the sides look similar to the ones on the yet-unannounced Samsung Galaxy Alpha and appear metal. 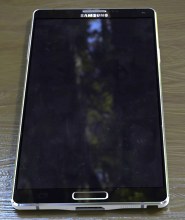 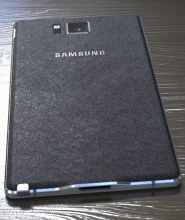 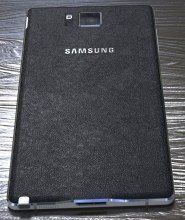 There's a plastic-like inlay in the side-frame that seems to add more water to the frame being metal rumors. The S Pen holster is etched into the side of the phone and there's a microUSB 3.0 port at the bottom along with a speaker grille.

There's what looks like a hear rate monitor alongside the camera lens on the back. The display of the Galaxy Note 4 should be 5.7" once again but with an improved resolution of 2,560 x 1,440 pixels (QHD).

The retail box of the Galaxy Note 4 has also made an appearance. The design on the front looks similar to the one in the images above adding some more credibility to the leak. 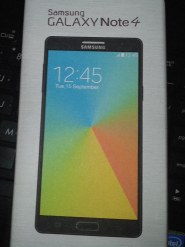 The Galaxy Note 4 will be shown (as is customary with Samsung) this coming September 3 on the IFA floor and should make it to the shelves starting September 15.

Thanks to our anonymous reader for sending this in!

can some one help why all my picture on this phone look metallic sort of black and white and how to set it back to normal.

I saw the phone as a preview at Best Buy and it was gorgeous. The picture was crisp and by far surpassing 1020p HD.All it's options, camera, and processor surpass the I phone anything. It is a bit larger then a galaxy s5 and isn't meant for a smalle...

ow comoon i was so happy with bottom speaker with this leak all my dreams destroyed and ou gave me hope for nothing thx!will stuck with my note 2 F this