Popular display analyzing company DisplayMate has decided to put the iPhone 5 through its various highly scientific tests and pit it against the Galaxy S III. The 4.8-inch Super AMOLED HD display of the Samsung flagship faces the 4-inch IPS LCD screen of the iPhone 5, as well as the 3.5-inch display of the iPhone 4 for good measure. 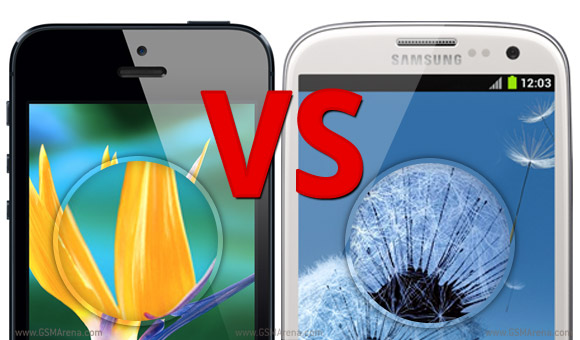 DisplayMate tested many characteristics of the displays, such as screen reflections, brightness and contrast, colors and intensities, viewing Angles and display power Consumption, running time on battery. So what's the verdict?

According to DisplayMate's lab measurements, the iPhone 5 has a "state-of-the-art-accurate" display, and is the best one they've ever seen, even if there's room for improvement in some areas. Compared to the iPhone 4, the IPS LCD display of the iPhone has lower screen reflections and much higher image contrast. The color gamut is also significantly improved and more accurate than before. But what about the Galaxy S III?

In a word - the OLED technology isn't able to produce the same kind of accuracy that the iPhone 5 IPS LCD does. That's because OLED is a relatively new technology that isn't yet as refined as LCDs are. As a result, it doesn't perform as well as the iPhone 5. However, DisplayMate promises a very bright future for OLEDs as they've been evolving and improving at a very rapid pace.

As far as the color gamut is concerned, Apple has made a noticeable effort in making the colors as accurate as possible, while Samsung hasn't really done this in their OLED displays. As a result AMOLED displays have inaccurate color representation and over saturated colors.

There's one thing that you should keep in mind however - the DisplayMate tests only judge the screens based on its accuracy. In reality, many people prefer the extra punch offered by the over saturated colors on AMOLED screens, even if they are not as accurate.

Check the source link below to see the the full comparison table with included measurements and assessments.

Don't be so quick to agree with that until you see it for yourself. People will go out of their way to say anything in the world they can to make every aspect of an Iphone perfect and dis on anything else near by.

Although I agree that we must compare the whole package (features, performance, multitasking...) in GS3 vs iP5 I must note that 99.99% of phone use is thru the screen and that is the most deciding factor in measurement. You can have a super cool andr...