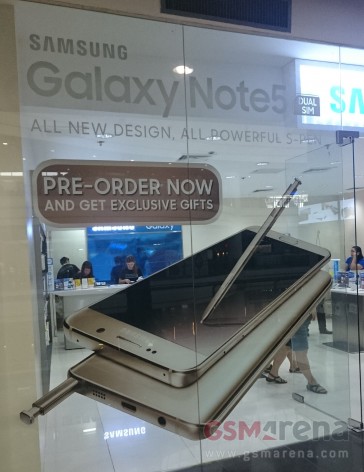 Samsung isn't taking its time with releasing the dual SIM version of the Galaxy Note5 and is already accepting pre-orders. The info comes from the Philippines, but we'd expect all markets to follow soon - of course, the ones where the dual SIM Note5 is meant to be available at all, as previous generations could only be found in select countries.

Meanwhile, an actual retail unit of the said device was the star of a photoshoot in Taiwan, bringing an unpleasant revelation. All hope of a microSD-supporting Note5 appears to be gone now, with the live images to prove it.

There were rumors circling around that the Galaxy Note5 Duos may come with a mixed-use second SIM card slot, which would alternatively accept a microSD card for storage expansion. However, the photo above clearly refutes such claims, showing two regular nano-SIM cutouts in the card tray.

This puts an end to the months-old debate of whether the Galaxy Note5 will have a microSD or not. Apparently, users will need to embrace cloud storage for more extensive photo and music collections and whatnot.

Thanks to Erni for the tip and photo!

Don't think samsung is able to have mixed-use second SIM card slot, which would alternatively accept a microSD card for storage expansion. if it does, he would have annoce in the launch. to add on its benifit. so far he only best microSD card mix ...

u so funny dude...i agree with u