Samsung Mobile Philippines just added two more variants to the already confusing pool of Galaxy J7 handsets. The Galaxy J7+ does have one really major distinctive feature going for it - a dual 13MP, plus 5MP rear camera setup. These sensors are placed behind quite bright f/1.7 and f/1.9 lenses, respectively and enable Samsung's Live Focus feature on the budget device.

Judging by the new J7+ specs page, the effect should work the same way it does on the Galaxy Note8, enabling selective amounts of background blue before, as well as after taking a shot. Hopefully, the quality of the end results will be comparable as well. Samsung seems to have included its new animated filters and stickers in the J7+ camera app as well. 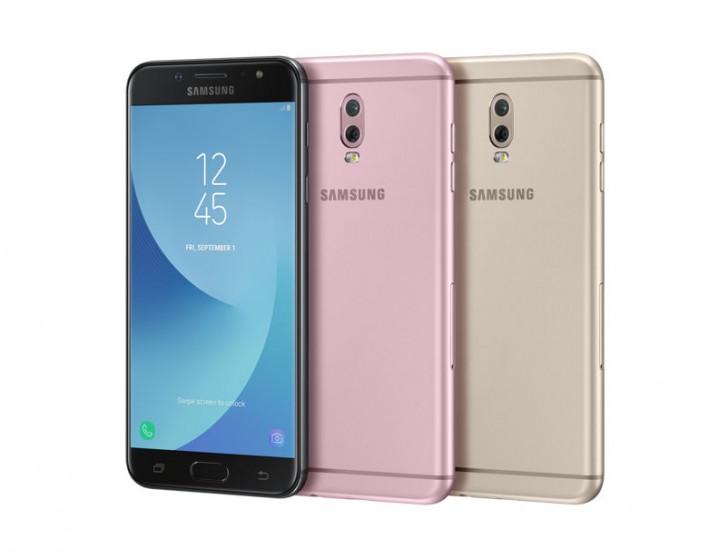 As far as other specs go, the Galaxy J7+ appears to have a few other notable differences, compared to the regular Galaxy J7. The display seems identical - a 5.5-inch, FullHD, Super AMOLED panel. Beyond that, the non-removable battery is a bit smaller at 3,000 mAh. The front camera has seen a bump up in resolution, up to 16MP (f/1.9). Just like its siblings, it also has a front-facing flash and only fixed focus on the selfie shooter.

RAM on the J7+ is set at 4GB and 32GB of expandable storage. While not explicitly stated on the Samsung page, the chipset, powering the Galaxy J7+ is described as an octa-core one with two distinct clusters, running at 2.39GHz and 1.69Ghz, respectively. This is likely the MediaTek Helio P25.

Other specs on the J7+ include Dual-band Wi-Fi b/g/n, Bluetooth 4.2 (no ANT+ support), a 3.5mm audio jack and a Micro USB 2.0 port. NFC and MHL are not supported either. You do get 4G LTE with a decent list of bands and two nano SIM slots. The second one of which shares a hybrid cradle with the microSD card. Color options include Black and Gold (although a Pink one is pictured as well) and the asking price is PHP 19,990, or about $390.

The other new addition to the Galaxy J lineup in the Philippines is the J7 Core (Also known as the J7 Nxt). Overall, it seems to be a slightly downgraded version of the basic Galaxy J7 (2017). Its 5.5-inch, Super AMOLED display only operates at 720p and memory is set at 2GB RAM, plus 16GB of expandable storage. The battery has been shrunk down to 3,000 mAh, while the chipset is the same 14nm, efficient Exynos 7870. The J7 Core gets a slightly darker 13MP, f/1.9 main camera and a lower resolution 5MP, f/2.2 selfie one, still complete with a selfie flash.

Other specs include Wi-Fi b/g/n, Bluetooth 4.1, interestingly enough, with ANT+ enabled. Still no NFC or MHL though. A Micro USB 2.0 and 3.5mm audio jack are also part of the mix. So are Dual-SIM and LTE support. The Galaxy J7 Core is also available in Black and Gold and currently going for only PHP 9,990 or $195 in the Philippines.

Thanks for the tip Ef Raim

I have 5.000 contacts, when I search contact very slow. Anyone help me, show me the way of contact search more quickly

Its slot is hybrid