Huawei Honor launches, we have the hands-on shots

Today Huawei launches the Honor, an Android smartphone with budget on its mind. 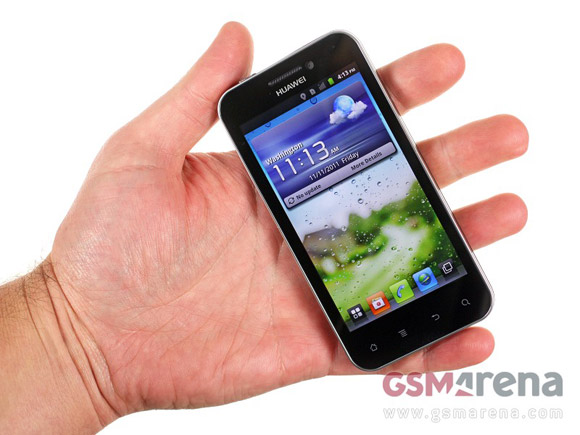 So far we've taken the previously announced Huawei Honor for a single-core handset (our test unit runs on a single-core platform too), but today Huawei announced on its Facebook page that the retail Honor will be powered by a dual-core processor, ticking at 1.4GHz. Update: Huawei denied that. In a reply to an inquiry on Facebook, the company confirmed that the Honor has a single-core processor.. There's also 1GB of RAM and 4GB of user memory, expandable via the microSD slot. The front of the device is taken by the 4-inch 16:9 FWVGA capacitive touch screen. The image quality isn't going to win any awards, but it's bearable, especially if it comes with a reasonable price tag.

At the back there's an 8MP camera, capable of shooting 720p HD video. It has HDR functionality built straight in. Beneath the cover there's a 1900mAh battery providing juice. At the front Huawei has thrown 2MP cam for video chatting, which is also welcome. Wi-Fi, Bluetooth 2.1 and microUSB are also on board, which is to be expected for a device running Anrdoid 2.3.5.

As you can see, we actually have the pleasure of meeting the Honor at our office. So, naturally, here come our hands-on shots.

We don't know about you, but to us it looks an awful lot like the LG Optimus Chic.

The Honor launches globally sporting a classic black color, with more to come later in the year. Pricing is yet unknown, but as with all Huawei devices, this one should be reasonably priced too.

Is cricket wireless releasing it?