Dual-screen LG V10 is shown in another leaked image 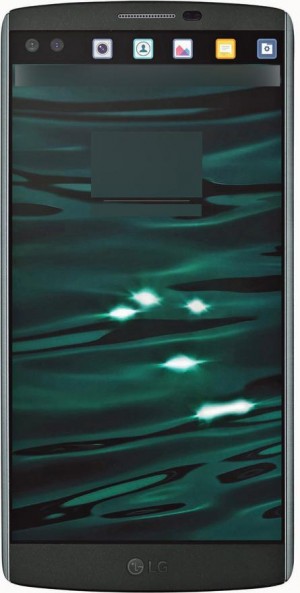 LG is working on an Android smartphone with two displays - and they're both on the front. This device, known as the V10, was caught at Chinese regulatory agency TENAA a while back, and it might become official at an LG event that's taking place on October 1.

In the meantime, though, we're treated to a new leaked image showing the LG V10, which you can see on the left. And this time around the small secondary screen is clearly visible above the main display.

In this render it's filled with five app shortcuts, but perhaps it will have some other uses too - we can imagine LG might allow it to also show a few contacts, for example, in a similar fashion to the Edge display on Samsung's Galaxy S6 edge and Galaxy S6 edge+.

The secondary screen reminds us of Verizon's Samsung Continuum from 2010, which featured a 1.8-inch 480x96 AMOLED touchscreen underneath the main display. To put it lightly, the Continuum never reached bestseller status, so it's unclear if LG's attempt at a similar product will be more successful.

According to the aforementioned TENAA listing, the LG V10 will have a 5.7-inch QHD main touchscreen, a 16 MP rear camera with dual-LED flash and laser autofocus, a 5 MP selfie cam, 3GB of RAM, 64GB of expandable storage, a fingerprint scanner built into the power key, and Qualcomm's Snapdragon 808 chipset at the helm.

64gb internal with microsd supporting up to LG knows how much

We shall see in due time.