Huawei is preparing several launches in the forthcoming months. They will introduce the Kirin 970 chipset at IFA 2017, the Mate 10 phablet is being announced in October, and according to a Weibo leak, the new EMUI 6.0 will also come by the end of the year. It would be based on Android Oreo 8.0 that brings PIP mode and better control of the notifications. 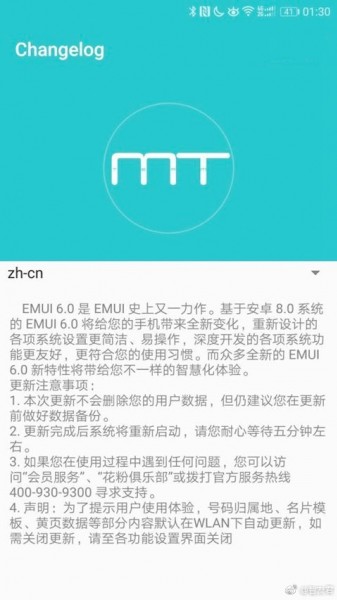 According to the Change Log, the Emotion UI will come with a new design and the settings will be easier for navigation. The interface would become “more friendly for your habit” which probably means it would give better suggestions throughout time, depending on how you use the phone.

EMUI in all the latest Huawei smartphones, including the subsidiary company Honor. Surely we expect the Mate 10 to arrive with new user interface, but the Chinese manufacturer might decide to surprise everyone and push the v6.0 update to existing devices before October 16.

Great staff there, I thought as much. Long live Huawei. You are a great company.

Tbh , EMUI is more then ok , i like it. I actually miss it when im using my old nexus 5