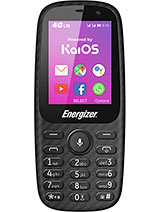 Great phone for money. Seems faster than the Nokias and better battery stamina. The only downside is that this phone doesn't always have the settings for some carriers and you have to manually put in the APN settings. Once done fine. The Nokias seem to recognise every SIM card carrier I tried.

First day of use, initial impressions are positive.
Quickly made a software update over wi-fi. It seems external speaker is louder after this.
Easily imported all my 1447 Google Contacts, easy set-up of Gmail account in the KaiOs mail app.
Geolocation took some time lo locate me, but after this it works fine in Maps or weather.

Nice screen,good battery life ,fast 4G LTE and signal lock-on. The KaiOS installed in this phone is MUCH FASTER AND MORE RESPONSIVE compared to the Nokia bananaphone or 2720 flip.
It's also cheaper.

I highly recommend it as a second phone , 4g WiFi hotspot or MP3 player . Cameras are too basic ,but that's okay.contacts can be imported from Google.

Aussie, 12 Oct 2019If you really want a quality Kai OS phone then go for NOKIA. Disagree.this phone is better than the Nokia 8810 4g and the Nokia 27xx Flip ( I have all 3 phones ,I know what I am talking about )

Buying this energiser phone is better value as the KaiOS and the internet is faster compared to both Nokias. And it's so much cheaper too .

Only consider the Nokias for nostalgia and style.you want to maximise KaiOS potential,use this phone .

Dear Everyone,
I have a question about this phone. Can I use this for voice communication at regions with no 2G coverage, on 3G and VoLTE on the carrier Etisalat, U.A.E. The recent GSM upgrade by Etisalat has retired 2G at my property and I got Nokia 220 4g for communication. However, that phone does not feature 3G at all and it features 2G and 4G and if I were to be where there is no 2G coverage, I receive 4G signals on the phone, without the ability to receive or make calls.
I would like to be informed that If I get Energy E241S, would I face this trouble? Or can it make voice calls on 3G and 4G networks on Etisalat, U.A.E?

not so bad but there are cons; there are apps you cant uninstall and the store is very limited. I prefer to add a contact form pc I couldn't find any pc suite or similar thing. I am not sure it has really GPS, its geolocation, also not counting your steps even watches can do that, imagine you go walking, running with this light phone and you can't make it... and processors are not lagging but 28nm chipsets consume more battery than for example 12nm chipset. the phone is heavy for quality not very well built ahh french people, they are creative but always miss something... led flash and camera very poor, instead, remove them to save weight. face cam is ok, it's needed for talking. so KaiOS is very good idea but needs time for development also big brother doesn't let them as free as Symbian. Nokia E52 was much much better phone, you can do better guys, don't scare from big companies. people need a business phone... and I couldn't find how to add Turkish voice recognition support...

Does it have SIP Protocol ?

Hi guy, How many hour hot spot ENERGIZER E241S can ?

Not a bad phone for the price. The cameras being VGA are poor even by feature phone standards but you do get a selfie camera. Phone performance is good.
Just one warning. SIM card slot 2 only seems to be 2G data speed. So if you use both SIM slots make sure you use SIM slot 1 for the card you have the most data allowance for.

David, 24 Oct 2019Having just bought a Nokia 800 Tough I can tell you from bitter experience that the E241S is ... moreNot sure about that. Nokia phones are really well built but the software is really poor this is the exact opposite. Nokia poor Bluetooth Energizer good, Nokia 800 3g Energizer 4g and hot spot. Nokia difficult to import contacts and with limitations Energizer really easy. In Your hand Energizer is a bit of a toy if the 2 made a phone it would be perfect. Energizer should have an option to charge a different phone with its powerful battery.

Mikey, 29 Feb 2020Does it have hotspot?Yes, it has 4G hotspot. But it drains the battery very quickly.

Background: I'm a middle-aged grumpy person who stares at a computer 8h/day. I don't need to stare at a smartphone too.

I wanted a phone with 4g and physical keys. This one fits the bill and at 40€ it doesn't break the bank.

Despite some reviews I've read here and elsewhere, the call quality is decent. The speaker functions normally for a piece of hardware at this price point. I can hear people just fine.

KaiOS feels responsive, the only thing that «lags» is Google Maps - it can take a good 20 seconds to find your position in the map.

Battery life is similar to that of a 2G dumbphone, if you only use it for calling and texting.

The camera is a potato. For 40€, what did you expect? ;) But the image is still better resolution than that of the new Nokia 3310, for example.

There's not a lot of apps in Kaios, but the selection is decent. It even has several simple games, and of course Whatsapp, Facebook, Youtube and Twitter.
If you're tech savvy you can check out bananahackers and jailbreak your phone, in order to install their off-market apps. Be sure to do a full backup!

The only thing I don't like so far is the feel of the plastic keys, which is a tad too hard and «clicky» for my liking. But hey, you get what you pay for.

If you don't want to be a smartphone junkie but still need the occasional web browsing, go ahead and get this one.

I have this phone and im happy for a simple with a great features.. by the way this phone have mobile hotspot, nice huh. Only the weird thing is, it is better listening in calls at the back of this phone . But for me it is just fine. Cheers.

Elvis, 10 Nov 2019I bought one of these yesterday. I thought it was per-owned ("used") but if so, not enough to... moreDoes it have hotspot?

Dec-2019 i bought this mobile- Energizer Energy E241s bcoz of its less price with 4G ability, but not worthy due to its very low voice audibility and not clear during calls, which fails to provide basic feature of calling. Battery is ok for one and half a day use. It has whats-up and FB features.