Engineering prototype of Nokia Normandy leaks in a live photo

Nokia’s much talked about Normandy headset with Android OS made a (sort of) live appearance. A photo of an engineering prototype of the device showed up on Twitter. 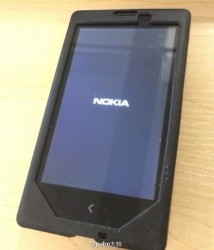 The image shows the yet to be announced handset boot up in a casing which conceals its looks. However, the button below its LCD display falls right in line with the press images we’ve seen already.

Rumored specs for the Nokia Normandy include Qualcomm Snapdragon 200 SoC, 4” FWVGA, 5MP camera, and Android 4.4.1 KitKat. The low-cost smartphone is tipped for a launch during MWC 2014 next month in Barcelona.

microsoft bought nokia. plus wp hasn't been able to make it to lower price range. so we can only expect android handsets in this range, which is what i personally look forward for.

Na! I am not a fanboy. I defend Microsoft because I like their products. That will not make me a fanboy, right? If you go through Windows Phone articles/reviews/Nokia articles/Nokia cell phone reviews, you'll only find him bashing Windows Phone with ...