Enter LG KP500 - pitched as the most affordable touch phone

Aiming at the midrange market, LG will be bringing full touch handsets to the masses, by introducing their latest LG KP500. Standing at 11.9 mm of thickness, the LG KP500 may be affordable but not at the expense of style.

Borrowing its design from the LG Renoir, the LG KP500 uses the latest reincarnation of the proprietary LG Flash-based UI. The user interface is thumb-optimized, but a stylus is also provided to assist handwriting recognition. Unlike the LG Viewty however, the stylus here is tucked into the body of the handset itself. 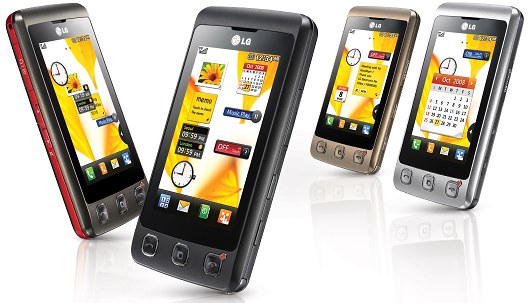 The LG KP500 is not a high-end device, but once again it's feature pack is optimized for affordability. The KP500 doesn't have 3G support, but there's quad-band GSM/GPRS/EDGE for a true world-wide use.

It also has a 3 megapixel fixed focus camera, but there's a 3-inch wide touch screen display with a resolution of 240 x 400 pixels to poke around. A microSD memory card slot, stereo Bluetooth, FM radio and an accelerometer for auto screen rotation and gaming completes the tally. A virtual landscape QWERTY keyboard and office document viewer are also present.

We can also show you the official LG KP500 video demo:

Weighing only 89 g, the LG KP500 will land in Europe in October 2008. Its price will be announced later on, but we can't help but wonder what do they exactly mean by affordable - their most affordable touchscreen handsets are the LG KF700, which currently sells online for around 200 euro (285 US dollars).

That's just the slogan, LG does stand for Lucky Goldstar

kp500 can't access on internet.. any solution for this?

I have this phone its not really good