If you are an Essential Phone owner, and have your device enrolled in the company's Oreo beta program, here's a new one for you: the Oreo beta 3 update is now available. You can download it manually from the company's official website, or wait for the OTA.

Earlier today we released Oreo Beta 3 over OTA. You can learn more about Oreo Beta and download the release here: https://t.co/oonhRC1b16

As for what's included in the update, there are two changes when compared to the previous build: January security patch (which includes fixes for Spectre and Meltdown) and some other stability/bug fixes. 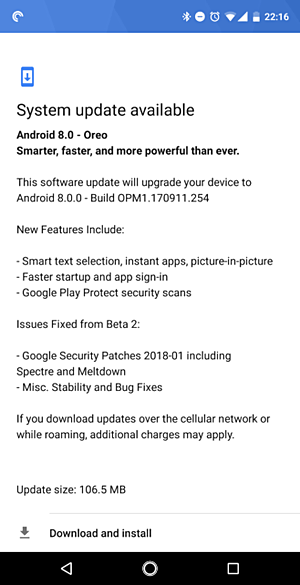 The update arrives as build version OPM1.170911.254, and weighs in at around 106MB. As for final, stable Oreo build, Essential has so far just said it'll be made available soon.

Fabio, 5000 were in September. Now they are more then 50 000. Just inform yourself before posting the hate.