Essential Phone is now available to purchase in US and Canada

Late last month, we told you that the Essential Phone will reach pre-order customers' hands in the US by the end of the month. And now, it has come to light that the device is available on open sale in the country.

The company has the Black Moon color listed on its website for immediate shipping, and is asking $699 for it. 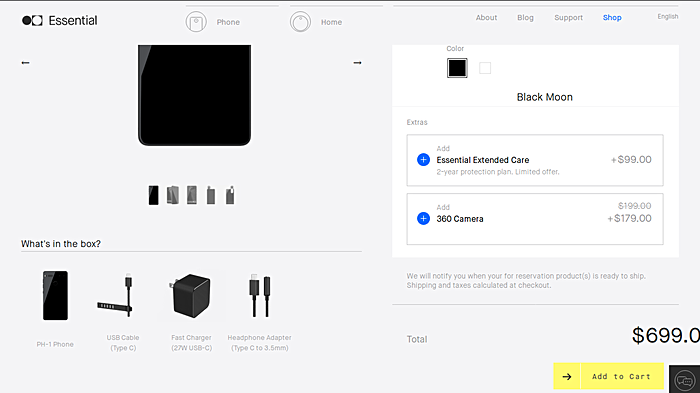 Aside from Essential, the device is also being offered by third-party several retailers. While Amazon, Best Buy, and Sprint have the phone listed on their websites, immediate shipment isn't being offered by any of them at the moment. Sprint, however, mentions that the Black Moon variant will begin shipping September 13 onwards.

Over in Canada, the only source where you can purchase the phone is Telus, which is currently offering the Black Moon variant for CAD 1,050 (around $865).

In a related news, the handset's Camera app has received an update, bringing a couple of notable changes. Basically, the update fixes issues users face while saving 360 videos. Plus, it also speeds up color/mono image fusion. Aside from these two changes, there are some general stability fixes as well.

Really? A lot better? Do you mind mentioning what makes it better besides the smaller bezels it has?

Maybe if you leaned to use a camera it might help, in photography it's called lighting and composition, I have no problem taking great pictures with the PH-1, and this latest software update smoothed out a few things https://play.google.com/store/app...