LG G Pro 2 existence was confirmed earlier this year by a few live pictures of the device. The G Pro 2 has the G2 looks but comes with a bigger 6" display. It should go live at a press event scheduled to take place on February 13 in Korea.

Today, just three days ahead of the official premiere, the LG G Pro 2 specs leaked via AnTuTu's database. It seems someone has put the two G Pro 2 units (Korea-bound F350L/F350K and the international D837 version) through the benchmark and you can check both the specs and the scores of the upcoming gadget. 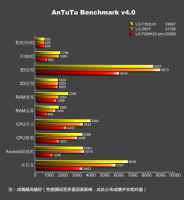 Here is hoping the LG G Pro 2 will do better on the market than its predecessor which never reached its full potential.

i dont see any Benchmark effect, my G Pro serves me well. very stable, even my antutu is just 22k, you wont much see the difference to other phone :D not if your to over reacting and wanting the best of the best for you haha :D naahh, just be satis...

Hahaha.htc always was better than lg and samsung and i never see that score for g2.g2 is about 30000 and you can check it in this site.tab lg>g2>.....check slide and choose benchmark. Dont make story please.every body can see and find my true w...

So now that your Note 2 is already on 4.3, does it prove that it can outperform my G Pro still on 4.1.2? What is this fuss about android version updates self? LG provides stable phones while samsung produces buggy phones, then produce regular update...