Today a trusted source who wishes to remain anonymous but has been reliable in the past sent us an image of an upcoming official case for a yet unannounced Honor device. Here it is in all its glory: 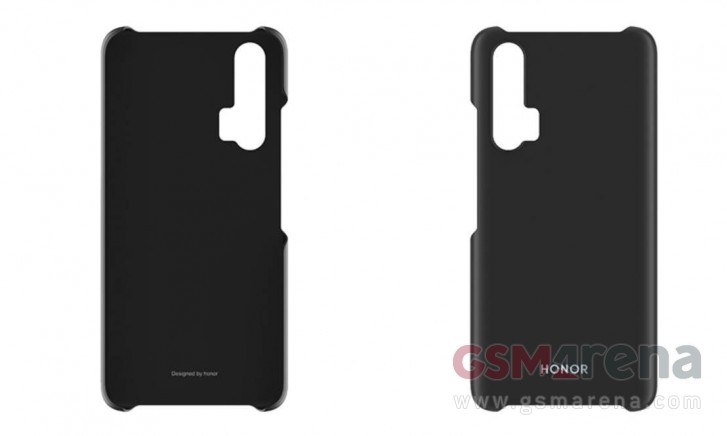 While seeing just the case doesn't give us a lot of information about the phone it's designed for, there are still some educated guesses we can make. First off, it looks like this handset will have a bunch of rear cameras, as the cutout for those is quite big. The design of the cutout itself makes us think of the Huawei P30 Pro's camera arrangement, with the LED flash placed to the right of the main camera array, although in this case it's on the lower side, not the upper.

We'd venture a guess and say this Honor device will come with at least three cams on the back, unless it completely apes the P30 Pro and adds a TOF 3D camera under (or above) the LED flash as well. Given that all of this implies it will be a high-end offering, it's likely to be the Honor 20 Pro, because so far we haven't seen any leaked renders of that handset itself - whereas the non-Pro Honor 20, if we go by past leaks, will have a different rear camera arrangement. Then again, if those previous rumors were wrong, we might in fact be looking at a case for the Honor 20. Only time (and more leaks) will tell for sure.

The Honor 20 Pro is expected to sport Sony's IMX600 sensor, which apparently has 48MP resolution just like the IMX586 that we've already seen in a few phones. The Honor 20 Pro has also been rumored to have a 6.1" OLED screen with an under-display fingerprint scanner, the Kirin 980 chipset, and three RAM/storage configurations - 6/128 GB, 8/128 GB, and 8/256 GB. Pricing in China should start around $450, which will probably translate into €500-550 in Europe, and the Honor 20 Pro could get official as soon as April 25.

It looks pretty much like the HUAWEI P30 PRO to be honest, with the only difference being the LED flash and probably a ToF sensor lowered in terms of the position. I guess the differentiation between the P series and the HONOR sub brand is starting t...

Well i dont want to be rude but the hole for camera looks like a mens daily braindriver.