Now that the eagerly fall release of the next Samsung Galaxy Note device is drawing ever closer, it only makes sense for us to start seeing more and more of the phablet. We've been going by one single set of set of blueprint-based renders for quite some time now and its high time for another round. Well, today brings just that as a reliable source sent us a bunch of technical drawings and while there is still a lot to be learned about the Note7, the new images do fit nicely and support most of what we already know. 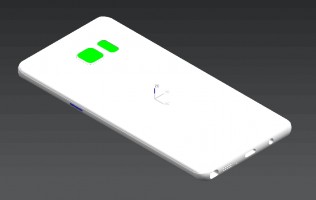 We'll start with the obvious - the display is clearly curved, as already suggested by a case leak and if other rumors are to be believed, this will actually be the only shape the 5.8-inch, QHD, Super AMOLED panel will come in. No flat one this time around.

The iris scanner is also clearly visible. Flipping the device (or rather the render) around reveals a familiar camera placement on the back - a square module with rounded corners much like the one on the Galaxy S7. In fact, sources claim it will be the familiar 12MP dual-pixel sensor, but with improved software. On its side, we find the flash and likely heart rate sensor. 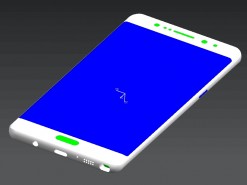 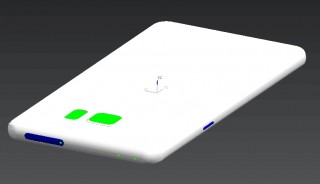 The back itself looks to be slightly curved and very reminiscent of the Note5. This could suggest a glass panel yet again, a theory also backed up by the visible shape of the S-pen hole, which looks similar to the one on the Note5 and will probably share the clicking pen-style mechanism.

While we are looking at the bottom, we can clearly see a single speaker grill, a microphone and what appears to be a symmetrical USB Type-C port. Fans can also rest assured that the 3.5mm audio jack is present. As for the top side, there is a SIM card tray and a couple of markings, perhaps indicating a triple microphone setup or perhaps a return of the IR blaster?

As per other currently rumored specs on the Note7, there is the alleged 3,600 mAh battery. Also, a Snapdragon 821, as well as Exynos 8893-powered variant have been circulating the rumor mill. Memory is still uncertain, but 6GB of RAM would be a good guess, along with 64/128/256GB storage options.

The Galaxy Note7 announcement should come on August 2, but that is still not officially confirmed as well.

we have no doubt that Galaxy note 7 had a bad batch production with battery issues pictures of affected customers with damaged phones are found in internet. But how about the others 30 affected phones of the 35 reported. Now a day everybody upload ...

why Samsung is releasing note 7 while note 6 has yet to be released..? any help

I love how Samsung first made the Note Edge with a useful edgescreen, and then minimized it to almost nothing. These edges do nothing but increase cost. I for one will continue to use the Note Edge. Thanks.