We've seen the Xperia SL in leaked press shots showing its various colors, but now an anonymous tipster hooked us with the first live photos of the device. 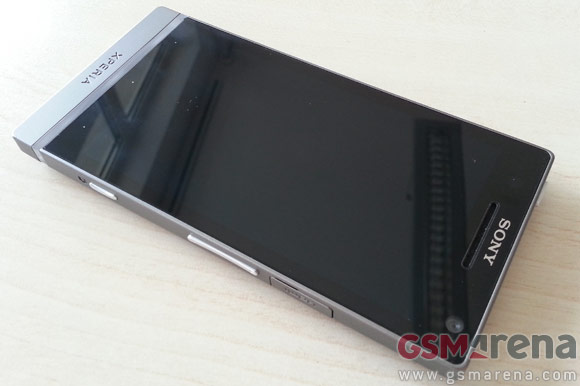 Posing in its silver uniform, the Xperia SL (LT26ii) is known to be a slightly bumped version of the Xperia S. It rocks the same MSM8260 Snapdragon chipset, but with a processor overclocked to 1.7GHz instead of 1.5GHz.

Other than that, our tipster tells us its the same as the Xperia S. This means 1GB of RAM and 32GB of internal storage, sans microSD card slot. At the front, there's a 4.3-inch LCD display with HD resolution and the funky illuminated strip above which are the three Android keys (Back, Home, Options).

At the back, there's a 12MP snapper with LED flash. On the front, there is the same 1.3MP camera for videocalls. Happily, the Xperia SL will ship with Android 4.0.4 Ice Cream Sandwich, and not Gingerbread, as the Xperia S did.

We'll learn more information about the Xperia SL on Sony's pre-IFA event in Berlin on August 29th. There, the LT29i Hayabusa is also expected to make an appearance.

I like the deigns of Xperia P, u, S and SL. very simple/ business looks though packs a lot of fun. If I were to trust any other brand other then nokia when it comes to hard, it would be sony.