Qualcomm owes a lot of its current chipset domination on the best (until recently only in town) on-chip LTE connectivity. Samsung is a company that likes to use its own building blocks and the Exynos ModAP comes to fill the void of an LTE Cat. 4 capable chipset.

ModAP stands from "Modem" and "Application processor", underlining the departure of previous setups where the modem was a separate chip.

The Exynos ModAP is built on a 28nm HKMG process. The processor supports Heterogeneous Multi-Processing (HMP), which allows all eight of its cores to work simultaneously (4x Cortex-A15 + 4x Cortex-A7). 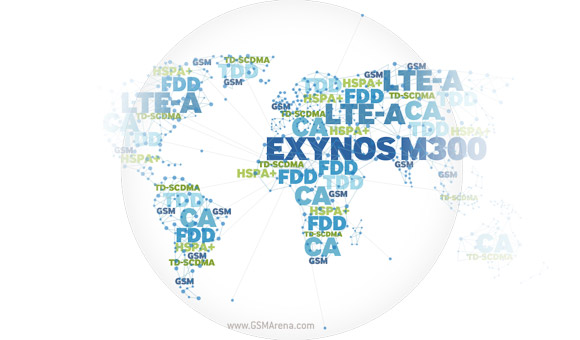 The modem also uses the more is better than one approach and supports carrier aggregation, meaning it bonds together multiple channels to achieve the LTE Cat. 4 prescribed speeds of 150Mbps downlink and 50Mbps uplink.

The modem supports both FDD and TDD, popular internationally and in China respectively. 2G and 3G technologies are supported as well, including TD-SCDMA.

The chipset can record 2160p video at 30fps and has a relatively speedy 6.4GB/s channel RAM. The GPU was not mentioned but a recent Mali model would be a solid guess.

Yesterday we were expecting word of the Exynos 5433 Octa, which is said to have an Intel-sourced Cat. 6 LTE modem. Still nothing on that but if benchmarks are any indication it will be a blast.

Samesung stop this funny things and think wisely. . Or you will dead soon . . Still nokia is far better than samesung . .

It this the processor thats going on the note4?