Finally, here's the ver.3 iPhone… or maybe not?

The Apple Worldwide Developers Conference 2009 is getting closer and closer and so does the new iPhone. There were plenty of images created by gifted or not so gifted photoshoppers but the latest batch of photos seem just about fine. We got them from an Italian iPhone blog but, reportedly, they come from the Italian Apple website. 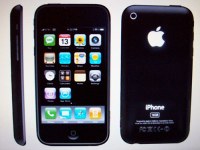 Is this the new Apple iPhone

The changes in iPhone's outfit don't seem that much at first sight but at a second, closer look there are several changes visible.

The back should now be matte (not the slippery fingerprint nightmare found in iPhone 3G). The frame surrounding the touchscreen is black and the headphone jack has moved from top left to bottom right. Its place has been taken by the power button which used to be on the right.

And there is a new side key on the right (perhaps a camera key).

A closer look at the changes

Let's just remind you what the previous rumors brought to light. The new iPhone is expected to feature a 3.2 MP AF camera with video recording, will be able to send image/video MMS, and will have double the RAM and increased processing power There should also be a digital compass on board to complement the GPS receiver.

Of course, until the new Apple iPhone v3 sees daylight officially, all images and specs popping up in the web will be presumed fake until proven otherwise. So bare with us as we count the days to the Apple WWDC.

I didn't know there was a 3.2 mpixel camera in a cellfone back in 2001 correct me if im wrong..and 1 thing SE simply has no innovation and thus sucks big time..