The first two Firefox OS phones are already on sale – they are the Keon and Peak from GeeksPhone. The two are aimed at developers and run a Developer Preview of Firefox OS, so while they might not build up a user base they should help devs have apps ready by the time the consumer-oriented Firefox phones hit the stores.

The prices are as announced a few days ago – the Keon costs €91 and the Peak is €149. Keep in mind that those prices do not include taxes. The phones will be shipped worldwide. 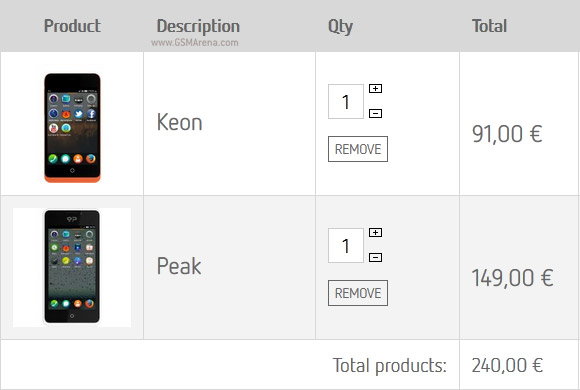 There have been reports that the GeeksPhone site is experiencing issues and your order might not get though. As a side note, you can also use a Sony Xperia E for development purposes, Sony released a ROM that puts Firefox OS on the entry-level Android phone (its specs are similar to that of the Keon).

Thanks to James for the tip!

dear sir, i want to buy a mobile phone with following conditions please suggest me 1. touch with android os 2. battery should be 3000 or above mhz 3. dual sim 4. 2gb ram or above 5. display clarity should be good

Understand the fundamentals of how this system is being developed (free of corporation and based on truly open standards) and your comment will be surely disproved.