We have been hearing about the Firefox OS for a while now. Now, ZTE is about to release their first smartphone based on Mozilla's open source operating system, the ZTE Open.

Unfortunately, we don't have any photographs of the device just yet but we do have some key specifications that were spotted at MWC, which hasn't even started yet. 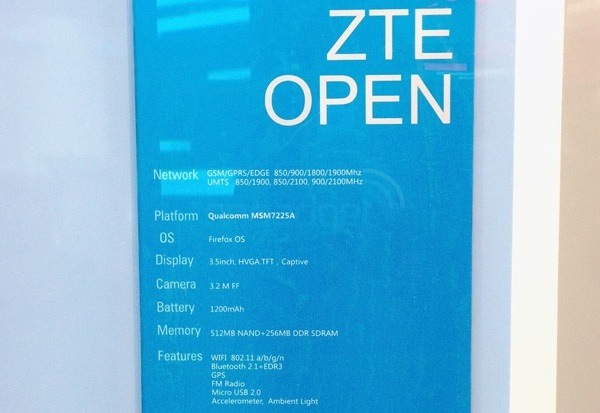 Looking at the specs, it's clear that the ZTE Open is a rather modest, low-end smartphone aimed at the budget end of the market. It runs on a Qualcomm Snapdragon MSM7225A SoC, which has a Cortex A5 CPU with unmentioned clock speed (it could be either of the supported 600 or 800MHz) and Adreno 200 GPU, 3.5-inch, HVGA capacitive touchscreen, 3.2 megapixel fixed focus rear camera, 512MB of storage memory and 256MB of RAM, Wi-Fi 802.11a/b/g/n, Bluetooth 2.1 + EDR, GPS, FM Radio and a 1,200mAh battery.

Not much else is known at this point but we will surely keep you updated as we learn more.

Firefox doesn't even support mp3 or wma in the browser where chrome does. Because most online radio websites use use mp3. & chrome works amazing.People out there reading my comment try & listen to Tunin radio in firefox because it wont work...