While there doesn't seem to be a consensus in the rumors about what it will be called, by now it seems pretty clear that Apple is in fact working on a new 4-inch smartphone. There have been many leaks about it lately, and this one could be the biggest yet.

The image you can see below allegedly depicts this device (on the right) standing next to an iPhone 5 (on the left). 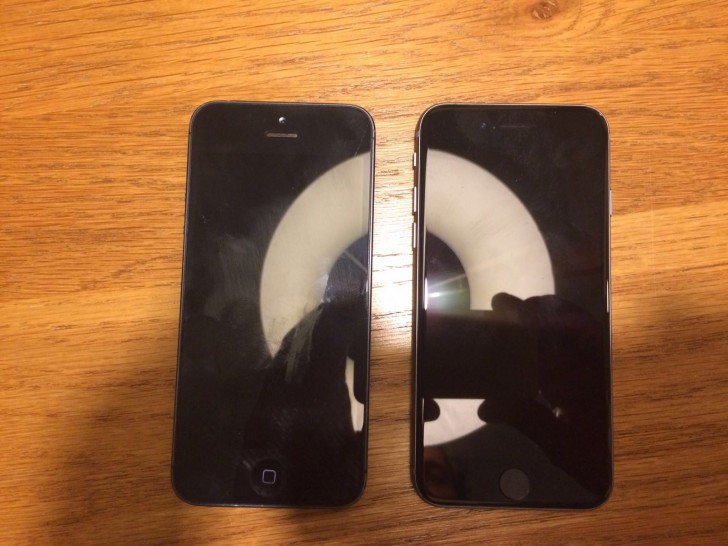 The new 4-inch handset might be called iPhone 5se, as per the latest rumor on the matter. However, in the past we've also heard that it would go by iPhone 7c, iPhone 6c, as well as iPhone 5e.

If this leaked picture is actually showing the next 4-incher from Apple, then it's easy to observe that it will come with a TouchID fingerprint scanner embedded in its Home button, the power button on the side, and a FaceTime camera placed to the left of the earpiece. As for dimensions, they seem to be more or less identical to those of the iPhone 5.

Hardware-wise, the latest mumblings have the iPhone 5se sporting the A8 chipset, Apple Pay support, VoLTE, Bluetooth 4.2, Wi-Fi 802.11ac, an 8 MP rear camera, and a 1.2 MP front snapper. It's due to be outed (and released) in March.

Thanks for the tip, dexterouz!

the 5S has the FF camera on the top... not next to the ear piece like the 4/4S models

Isn't an iPhone 5S on the right?

You seem to simply not get that some people wants a not too huge phablet but a PHONE. And NO ONE have made top speced phones for the last about four YEARS.... The closest is the Sonys so called compacts and the samsung alpha.... Try reading so...