It's no secret Microsoft is working on the Windows Phone 8.1 update that is supposed to bring notification center and intelligent voice assistant among other features. We've heard rumors and seen lots of alleged shots before, but today we finally get a glimpse of the real deal.

The leaked photos show the settings of the upcoming notification center and are from an early test build of the WP 8.1 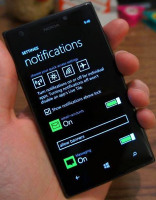 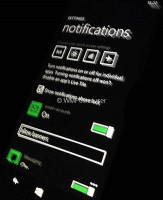 As you can see you can assign four quick toggles (Cellular data, Brightness, Wi-Fi, Airplane mode are the ones on the shot). There is also a checkbox for access the notification center from the lockscreen. Then there are the notification services you want to enable - emails, messages, etc.

It seems Microsoft is going to put everything the modern droids have in the notification center, instead of bringing it feature by feature as some of the competitors did.

Windows Phone 8.1 is expected to be unveiled at the annual BUILD conference in April and released soon after on all WP8-running devices.